Sporadic failures of rainfall in Namibia used to prompt coping measures by the Ju/’hoansi that helped foster their peacefulness, though the situation is different today due to the current drought. Reports indicate that it is the worst drought to hit the region in at least 30 years. In a normally arid country, rainfall measured during the last rainy season at Windhoek, the nation’s capital, was half the normal amount. Crops all over the country are failing, livestock has little to eat, farmers are selling their cattle, and some people face famine. 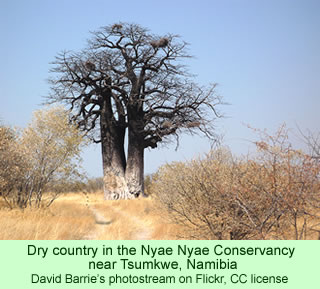 In May, President Hifikepunye Pohamba of Namibia declared a state of emergency and pledged $20 million of assistance for hard-hit areas. The estimated one-third of Namibians who are especially dependent on subsistence farming are particularly at risk, Aljazeera reports. People living near Tsumkwe, such as the Ju/’hoansi, are in the region affected by the drought and the threats of famine.

Early in June, the office of the prime minister reported that the distribution of over 40,000 tones of maize was proceeding well. The Prime Minister, Dr. Hage Geingob, who is heading up the relief efforts, indicated that water shortages also loom.

The International Federation of Red Cross and Red Crescent Societies launched an appeal for support on July 8th. Rural Namibians are having trouble even finding wild foods, and harvests of crops, presuming the rains return this coming November, will not occur until well into 2014.

One source reports that the Namibian police appear to be trying to resolve the situation in the N#a Jaqna Conservancy. They ordered the invaders to remove their fencing and to leave by early July, but so far nothing more has happened. A news report on July 17th indicated that Attorney General Albert Kawana is refusing to accept the severity of the drought as a valid justification for the illegal invasion.

A report on Monday last week noted that food aid to the Tsumkwe Constituency of the nation’s Otjozondjupa region has run out. Tsumkwe is the central town for the Ju/’hoansi San and the Nyae Nyae Conservancy. The distribution of 13,000 bags of maize meal went reasonably well until the end of June when the program ended, though there were some problems with transporting it. Tjatjitirani Kandukira in the Chief Control Office of the Tsumkwe Constituency said that no reports of deaths due to the drought had yet come in. He appealed for more shipments of food.

Some news stories have blamed global warming for causing this drought. That argument may be correct, but anthropologists who studied the Ju/’hoansi while they still lived nomadically reported that the people maintained their peaceful social relationships partly because of the unpredictable rainfall and the potential scarcity of foods that have always been part of human life in that area of Africa.

Draper (1978) wrote that since the Ju/’hoansi lived in a very hostile desert environment, they had to keep moving in order to keep eating, since food and water resources were quite sparse. They did not have any periods of plenty, as people living in other arid regions might have had, and they had no way of storing food supplies. Their food security, she reasoned, rested on the peaceful solidarity of their groups.

Lee in 1972 said much the same thing, though his reasoning went in a slightly different direction. While the Ju/’hoansi lived on the land nomadically, he wrote, the compositions of their camps were quite flexible. People visited other camps frequently and shared their food resources readily. Territorial boundaries were vaguely defined and not defended. Lee found that a major environmental reason for this flexibility was the wide variation in annual rainfall. It varied by as much as 300 percent from one year to the next in any given location where the Ju/’hoansi camped.

He reasoned that the ability of the people to move from a drier location to another spot which had greater rainfall ensured their survival. Their reciprocal use of resources, in fact, helped foster harmony and allowed individuals to avoid violence by separating from one another into different camps.

Thus, the sporadic droughts prompted the Ju/’hoansi to be nonviolent both in order to effectively share resources and to separate from one another when serious conflicts arose. Those environmental conditions had other interesting social and cultural implications.

The variations in food supply meant that, while they were generally able to gather and hunt enough to sustain themselves, there was a lot of risk and uncertainty from the fluctuations. Wiessner (1982) found that the Ju/’hoansi reduced the risks through a method of social obligations and gift giving called hxaro. Those relationships pooled risks, particularly since food itself couldn’t be stored.  Since shortages were likely to be localized, the pooling networks were widespread in order to most affectively distribute the risk. The hxaro relationships were particularly characterized by close friendships, which were often fostered through giving hand made items such as jewelry fabricated out of bits of ostrich shells.

The religious and cultural values of the Ju/’hoansi also supported these social adjustments to scarcity. Marshal wrote in 1962 that the Ju/’hoansi frequently addressed prayers to Gao/na, their chief god, for food, for relief from droughts, and for other needed benevolences.

She added that, in Ju/’hoan thinking, since the gods and spirits are capable of both good and evil, they give humans both fortune and misfortune. Human social ills are thus the fault of humans, which they need to address on their own. The gods will punish humanity for their own reasons. In other words, don’t blame the lack of rainfall on supernatural forces—just adjust human societies to cope with unpredictable weather.

It is not clear from current news, however, how the Ju/’hoansi are really coping with the latest drought. Biesele and Hitchcock write in their recent book (2013 [2011]) that part of the normal diet of the Ju/’hoansi now consists of foods from government aid, provided through four distinct programs. The programs are erratic, however, as exemplified by the July news stories, so when the aid periodically fails, the people rely on temporary work, the sales of crafts, and, no surprise, foraging.