The upcoming Administrator of Tristan da Cunha, Mr. Alex Mitham, paid a two day visit to the Isle of Man last week to get some tips on the administration of a British island dependency. His visit follows an island-to-island exchange, which started in February with the four month stay of a Tristan couple that was designed to strengthen their work skills. It appeared from a news report from the Isle of Man as if the government there is proud of the new relationship. 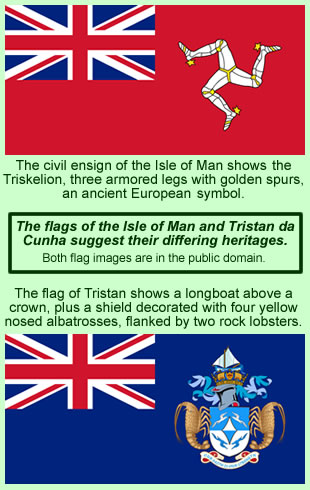 In May, the Foreign and Commonwealth Office of the UK announced that Mr. Mitham had been appointed to succeed the present Administrator on Tristan, Sean Burns, who is taking a new post on the much larger British Atlantic island of St. Helena. According to a brief bio that Mr. Mitham sent to the Tristandc website, he has worked for the government for over 10 years in a variety of positions in Revenue, the Home Office, Customs, and the Foreign Office.

Before joining government service, he worked as an architect, primarily on projects designed to improve economic growth in the farming sector. He wrote that he is a fifth generation farmer and that he continues to work on a family farm. He is particularly interested in sustainable farming and wildlife conservation, which is one of the reasons he applied for the post as Administrator on Tristan.

He and his wife Hasene, who is originally from Turkey and has a PhD in international relations, are both avid hikers and outdoors enthusiasts. He wrote that they both look forward to their new posting. Anticipating his new assignment, he visited the much nearer, and far less isolated, Isle of Man last week to get an inkling of what it is like to administer an island community.

Will Greenhow, the Chief Secretary on Mann, and Della Fletcher, Director of External Relations, welcomed Mr. Mitham. During his stay, he visited the chief executives of the departments of Education and Children, Economic Development, Infrastructure, Environment, Food and Agriculture, and Health. He also met with Gary Roberts, the Chief Constable, plus other officers from the Isle of Man Constabulary. Then he had a tour of the island’s hospital.

Ms. Fletcher said, “The Isle of Man has a great affinity with other small island nations and is happy to share its knowledge on key issues such as sustainability. The Island takes its international responsibilities very seriously and continues to build friendships and understanding with countries around the world. We wish Alex well as he prepares to take up his new appointment.”

In response, Mr. Mitham said, “I am looking forward to living and working in Tristan da Cunha and being an active member of the local community. There are challenges ahead for the island in terms of securing economic growth and stability, so it is extremely valuable to see how things are done in the Isle of Man.” It is clear from earlier news stories that the Tristanians are also aware of the need to improve their financial situation.

With a population of 84,000, Mann is of course vastly larger, more complex, and more highly developed than Tristan with its 260 people, but the two dependencies of the UK appear to be developing links that may prove useful in many ways for supporting unique island societies.