Reports last week indicated that a Zapotec town has peacefully closed down an unwanted North American mining project. The action contrasts with the violence that has marred relations between some other mines in Mexico’s Oaxaca state and nearby communities. 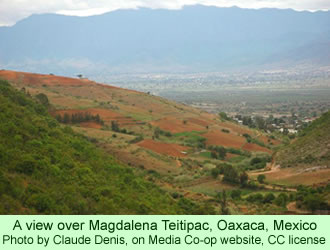 A news story on July 26th said that the Minera Plata Real mining company had operated in Magdalena Teitipac since May of 2009. Protestors recalled the irregularities of the original mining permits, and the fact that the people had not been properly consulted about the development of the project.

The article alleged that a local official, Andrés Molina Martinez, had been bribed, had then not properly consulted the town Assembly, and had signed a five year contract with the mining firm.

Community members demanded that arrest warrants that had been issued against local protestors be cancelled. They also argued that the mining operations in the Jacalote and Colorada hills were causing serious pollution to the local river, the Rio Dulce.

The Magdalena Teitipac Assembly, at a meeting on February 26, 2013, voted to expel the company. The company evidently then decided to back down and withdraw. Between July 9 and 13, it removed its mining equipment. Company officials René Hernández and José Pilar Salazar supervised the removal of company equipment and personal property.

In the wording of a Google translation of a news release from the community on July 29th, “Magdalena Teitipac reaffirms its opposition to any project that threatens the integrity of its territory and revokes [the] contract assembly agreement signed by the agricultural authorities to conduct exploration work….”

Both the news report of July 26 and the later community press release of July 29 indicated that Minera Plata Real is a subsidiary of the Canadian firm Linear Gold Corporation. A correction was published on August 1. In fact, a Denver-based company, Sunshine Silver Mines, became the owner of Minera Plata Real in 2011.

The August 1st story quoted the cautious words of Neftalí Reyes Méndez, an activist with Alternative Education Service in Oaxaca City. “We cannot affirm that it is a definitive triumph of the community, however the act of having the company take away its machines represents a significant advance in defense of the land,” he said.

News articles in April 2012 and February 2013 described the conflicts, and the violence that has resulted, in other Zapotec communities as they face the presence of international mining corporations and the pollution they sometimes cause in local rivers.