The Dalai Lama was pleased last week to be involved in opening a solar lighting installation in Ladakh, the latest in a series of alternative energy projects in the region. According to a news report last Thursday, he took part in a ceremony opening a new, 10 KW solar plant in Leh, the capital of Ladakh. 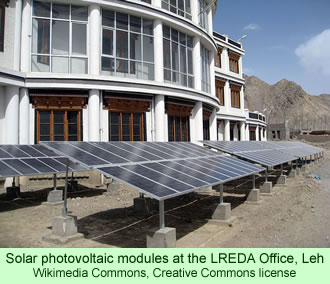 The small power plant was developed by the Ladakh Renewable Energy Development Agency (LREDA), an office in the state of Jammu and Kashmir, of which Ladakh is part. The new plant is located at the Jevetsal Photang, the Summer Palace of the Dalai Lama in Choglamasar, a suburb of Leh.

According to the news release, the Dalai Lama has been an advocate of measures which will help people cope with climate change. He said that it is important to use clean solar power in order to meet the rising demands for energy by the world’s growing population. He argued that access to energy should be a right for all people, without any discrimination.

The spiritual leader of Tibetan Buddhists said that solar energy will help humanity live harmoniously with the natural environment. He commended LREDA and the Ladakhi people for setting an example for India, and the rest of the world, by establishing many solar photovoltaic power plants in extremely remote villages.

During the inauguration ceremony, Jigmet Takpa, the Director of LREDA, in turn presented the Dalai Lama with a multipurpose solar light, which he seemed to appreciate. LREDA has distributed 15,000 of them since 2011, a number equal to 70 percent of the households in Leh. The costs of those lighting fixtures are affordable even for the people in the isolated Ladakhi communities.

LREDA is also doing research on helping homes to reduce their energy consumption through better management. The Leh District of Ladakh, which previously did not have enough electricity, has become much more energy self sufficient. A majority of the people in the district now benefit directly from renewable energy.

The LREDA website indicates that the agency has developed a comprehensive renewable energy plan for Ladakh, which includes the development of hydro power as well as renewable solar projects. The plan calls for the installation of 10,000 solar cookers, 25,000 solar water heaters, 4,000 solar houses, 7,000 passive solar buildings, and 80 more solar power plants.

A major national energy planning report focusing on the development of rural solar electric grids in India, released in Mumbai in late July, singled out the renewable electrification of Ladakh as an outstanding example for the rest of the country. According to the report, diesel power plants provided 65 percent of Ladakh’s power in 2010, but that number has dropped to 11 percent today and is projected to drop to only 3 percent by 2015.

The report refers to LREDA as “noteworthy.” The authors indicate that it has worked effectively with a wide range of political and management interests to bring renewable energy to many remote areas of Ladakh.