Aggressive Gorkha demands for independence from West Bengal, and moderate Lepcha responses to their agitation, have repeatedly shown the cultural differences between the two groups in India. 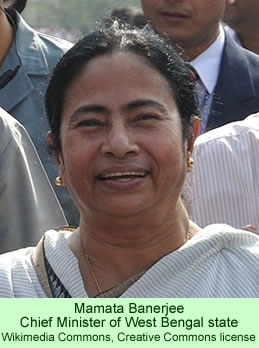 The Gorkha demands, which have been simmering for years, exploded into the news at the end of January this year when the Chief Minister of West Bengal, Mamata Banerjee, announced that she was going to be meeting with Lepcha representatives in Kalimpong, a town in the hills at the northern edge of the state bordering Sikkim. Bimal Gurung, the leader of the Gorkha people and director of its major organization, the Gorkha Janmukti Morcha (GJM), took offense and declared that his organization would begin a much more aggressive campaign for separation.

Ms. Banerjee, he declared, had a divide and rule policy. The Gorkhas, an important minority group in West Bengal, are descendants of the Gurkhas, famed for 200 years as fighters from Nepal. The Lepchas, while not as numerous in West Bengal, live in the same northern hills but they are well known for their peacefulness.

The trouble that arose in January and February simmered throughout the spring and summer months, but conditions deteriorated even farther in August. As a review of last month’s news shows, the Gorkhas, however just their demands may or may not be, often take aggressive approaches to promoting their agenda while the Lepchas react in less confrontational ways.

At the end of July, the GJM, not finding West Bengal state willing to meet their demands for more independence, called for an indefinite strike, referred to as a “bandh” in India, to start on August 3. Then the group called off the strike, but reinstated it when the government sent troops into Darjeeling, a large tourist town in the hills. “The state government is using force to quash our democratic movement. We won’t relent under pressure and [we will] go on an indefinite strike from Saturday,” Mr. Gurung said.

The Lepcha response, on August 15, was to present a folk dance in Kolkata during the festivities celebrating Indian Independence Day.  The Chief Minister was there, but neither of the two news articles covering the celebration in the huge city mentioned participation by the GJM.

Nine days later, the Gorkha organization ratcheted up the tension. Mr. Gurung publicly declared that the GJM was adopting a policy of hukumat, a Hindi word which means “supremacy.” His speech was a reaction to the arrest of three GJM men, all of whom were carrying weapons. Police evidently had evidence that they were involved with an incident of arson earlier in August.

According to a news story in the Times of India, the Gorkha hukumat declaration prompted the Indigenous Lepcha Tribal Association to announce a conciliatory move. It had earlier said that it had invited Chief Minister Banerjee to visit the hills, but the group said it would rethink that invitation. The convener of the Lepcha Tribal Association, Bhupendra Lepcha, said that the group had invited the Chief Minister a couple months earlier, but, “in view of the present situation,” he decided to convene an executive committee meeting to reconsider the invitation.

According to that news report, other Gorkha groups were beginning to turn away from the GJM. The bandh in Darjeeling had continued for so long, by mid-August, that it was imposing a considerable hardship on people who were not allowed to violate the strike by going out of their homes when they needed to. The Gorkhaland Joint Action Committee decided to lessen its support for the bandh, in part because of the way Mr. Gurung had made his latest announcement without even consulting other Gorkha leaders.

Two days later, it became clear that the Chief Minister was definitely not going to back down from her planned trip to the hills. The Lepchas were having second thoughts: they suspected that she has political motives for her actions. They were nervous about being caught in the middle between the state and the GJM. Both are more powerful, and certainly more aggressive, than they are.

Lepcha leaders have been avoiding reporters, but ordinary Lepchas in Darjeeling are nervous. “We fear the chief minister’s insistence on holding the felicitation [ceremony] in Darjeeling may convey the message that the hill society is divided,” one Lepcha individual said. This might provoke the Gorkhas. One GJM leader said that his organization had not firmly decided how to respond, but they might just prevent the Lepchas from appearing for the Chief Minister’s presentation. She might find herself making her announcements to no audience. Other Gorkhas suggested different strategies.

Last Friday, August 30, someone in Kalimpong put up some anti-Gurung posters around town, but others, presumably GJM supporters, quickly ripped them down. Confronting this sort of agitation that afternoon, a group of about 200 people, mostly Lepchas, held a peace vigil at the Trikone Park near the Kalimpong police station. They demanded that normal, peaceful conditions must be restored to the community.

Nima Lepcha said that the vigil, which he called a “Shanti Dhama,” would continue until peaceful stability is restored. “We want peace and normalcy to be reinstated in the Hills,” he said. “For this the bandh has to be withdrawn. Let the situation be peaceful as it was before. We do not want uncertainty and fear to prevail in the Hills. The present agitation has made the situation highly volatile.”