The Cayley Hutterite Colony, located 30 miles south of the outskirts of Calgary, was recognized a couple weeks ago at a ceremony in the city for the flood relief it provided recently in southwestern Alberta. 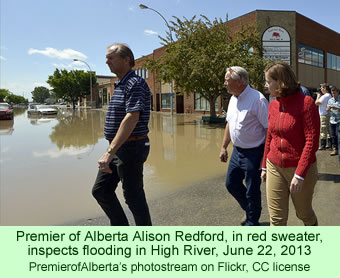 According to an article in the Nanton News last week, the Hutterites had pitched in to help with flood relief in the town of High River, nine miles to the north of the colony when southwestern Alberta was inundated with very heavy rains last June. The storms caused extensive flooding, described as perhaps the worst in Alberta’s history.

Members of the colony then helped for 10 more days organizing and preparing food at a flood evacuation center in Nanton, 8 miles south of the colony. Many Alberta news sources expressed appreciation for the assistance provided by a number of Hutterite colonies that month.

The ceremony at the Regency Palace Restaurant on August 23 in Calgary was spearheaded by Wayne Cao, a member of the provincial legislature. According to Margot Paul Anderson, “Cao wanted to honour the Cayley Hutterites for all their hard work in Nanton during the flood.” She said that because it is the harvest season on the colony, she personally drove some of the members to the ceremony in Calgary.

Representatives from the colony were presented with a Queen’s Diamond Jubilee pin and legislative scrolls. A photo on the newspaper website shows Ms. Anderson with five Hutterite women, all looking very happy with the recognition the colony has received. Ms. Anderson described the women as “over the moon.”

News stories published in this website, and scholarly literature, confirm the importance of effective outreach and generous giving by the Hutterite colonies to their neighbors. A news story in December 2012, for instance, pointed out the extent of holiday giving in Saskatchewan, and one in 2009 described Hutterite flood relief work in Manitoba.

Chapter 12, “Relationships with Non-Hutterites,” in Janzen and Stanton’s interesting 2010 book analyzes in more detail the complex ways the colonies try to maintain good relations with their neighbors, yet retain their own cultural identity in the face of modernizing pressures and tempting technologies.