Last week, a young American posted on his travel blog numerous pictures, a video, and an interesting narrative describing a cockfight he attended in rural Thailand. Bradley, who describes himself as “a 25 year old dude from California,” lives and teaches English in the rural northeastern part of the country. 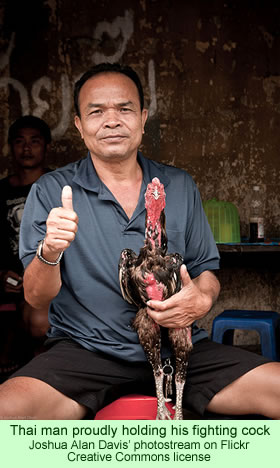 He explains that he was at first hesitant when he was invited by a couple of his colleagues to attend the cockfight with them. His narrative of the events at the fight gives his perceptions of cockfighting and the ways the Thai react to such violence. His description, photos, and video portray the scene quite effectively.

The facility, called “the farm,” consists of a large, metal-roofed structure housing a rink which is surrounded by four rows of concentric, stadium-style seats. Fluorescent lighting above the main pit adds to the clean, wholesome impression of the place. A restaurant is on the premises, and beer and alcoholic beverages are available. Bradley indicates that there are four smaller side pits on the periphery of the main arena.

About 200 local Thai people—mostly men to judge by the images, though there are some women and children—converge on the arena each Sunday for the contests. The owners of the fighting cocks often remove the spurs from the legs of their birds, which are then replaced by small metal knives before the fights begin. They are securely attached to the birds’ legs by strings and tape, and the cocks are inspected by judges before each contest.

The contests consist of as many as five, 20 minute rounds, with 20 minute breaks between each round. The birds fight with one another until one of them is severely injured—or killed—or until a contestant runs away. If a cock runs away three times, the contest is over.

The winner of each match, or rather the owner of the winning bird, takes away a purse after the fight. The winner of the largest fight during the day of Bradley’s visit took home a purse of 200,000 Bhat, which the author indicates was worth US$6,666. The video that Bradley includes shows a bit of fighting between cocks, but he was clearly more interested in the passionate cheering by some of the spectators in the stands, who at times appeared to be getting rather heated in their emotions.

Bradley says that betting is at the heart of the experience for the spectators, and while cockfighting is still legal in Thailand, the gambling is not. But, he writes, the presence of police in the crowd reassured him that there would not be any trouble. There were no bookies at the event—people placed their bets with one another at the individual contests through signals. The men we see screaming from the sidelines during the video presumably have placed large wagers on cocks fighting in the pit.

Bradley’s photos show spectators holding pens and notebooks, where they have written down their bets. He writes that some spectators make several bets during the contests, and they often modify them.

He was obviously of two minds about the experience. He expected that there would be a lot more chicken blood spilled in the arena. In fact, there was only a little. He observes that an Ultimate Fighting Championship match in a North American city “makes this look like a kindergarten class.” He also noted that the Thai people appear to love violence.

In his 2005 book Very Thai: Everyday Popular Culture, Philip Cornwel-Smith includes a chapter on “Animal Contests,” in which he writes that staged fighting between animals is quite popular in Thailand, even though they are limited by law to a couple arenas in each province and many Thai are opposed to them. Yet contests between Hercules beetles, fighting fish, cocks, or bulls are widely popular anyway.

Cornwel-Smith explains that the popularity of these blood sports is not easy to reconcile with Thai Buddhist beliefs in compassion. However, he argues, the Thai people frequently do contradictory things. The aim of the contests, he writes—and as Bradley also hints in his blog description—is not so much to kill as to see which of the animal contestants will have the nerve to survive. In southern Thailand, bull fighting is popular, but none of the bulls are killed. The contests pit one beast against another, both snorting and pawing, until one simply turns and runs.

In his famous 1972 essay “Deep Play: Notes on the Balinese Cockfight” (1), Clifford Geertz describes details about cockfighting on Bali that differ somewhat from rural Thailand. Geertz indicates that the Balinese put very sharp steel spurs on their cocks, and the birds frequently kill or seriously injure their opponents. It is a much bloodier sport in Bali than in Thailand.

Geertz also described the Balinese cockfight as a chaotic mob scene, a sharp contrast to the normal reserve of the Balinese people and, certainly, to the controlled crowd that Bradley depicts on his video, which shows only a few men gesturing angrily.

But there are also some similarities. Betting is an essential aspect of the experiences in both places. Some of the observations by Geertz perhaps would also apply to rural Thailand. He notes that the cockfights and betting on Bali are more focused on gaining status than on money. He felt that the fights affirm the social ranks of the participants and the betters, and that the contests symbolized rural alliances and competitions.

The cockfights, at least in Bali, serve to safely allow the expressions of inter-personal and inter-village hostilities and rivalries. They allow people to express their tensions and aggressions in a safe fashion. The Balinese rarely confront trouble if they can turn away from it, and they tend to handle social relationships with indirection, dissimulation, and obliqueness. Thus, the slaughter of cocks, in Bali, is an imaginative representation of how things might be among men.

Bradley does not analyze his cockfighting experience nearly as effectively as Geertz did, but he provides a start to understanding the rural Thai approaches to peacefulness.