A group of Mbuti have left their forest homes and taken refuge in a primary school in Oicha, in eastern DR Congo, where locals resent them for interrupting classes for the kids. The 60 or so Mbuti fled their forest homeland due to the depredations of the Allied Democratic Forces—National Army for the Liberation of Uganda. The ADF-NALU is one of the 20 rebel groups roaming the countryside in eastern Congo. 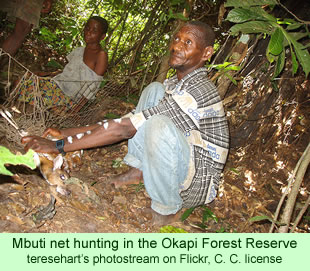 The problem for the Mbuti, according to an article last week in Deutsche Welle, the major German international broadcaster, is that they are disliked everywhere they go when they have to flee their own forest. People are repelled by their small stature and by the novelty of their forest-based, net-hunting, subsistence style of living. In Oicha, a girl tells journalists that she and the other students will harass the Mbuti until they leave their community. “Either we’ll make a lot of noise or we’ll throw stones,” she says.

Ulrich Delius from the Society for Threatened Peoples indicates that the Mbuti have been the target of discrimination by other Congolese people for generations.  He says that the Congolese do not respect them, despite the fact that they are particularly knowledgeable about their forest habitat. “But what can they do when they are forced to leave? They have to start again from zero,” he told DW.

Their problem, he says, is that they are persecuted on all sides. The Mbuti are the weakest society in the DR Congo, so they are harmed by the army, by the rebel groups, and of course by deforestation.

The rebel group M23 garnered international news headlines when it occupied Goma, the capital city of North Kivu province, but it is by no means the only group to terrorize the local people in that part of the DRC.

President Yoweri Museveni of Uganda confronted other African heads of state, meeting in his capital of Kampala recently, with the realities of the other groups that are disrupting life in the region. People flee from the attacks of such groups, often seeking refuge in school buildings across the border in Uganda. “These refugees are suffering,” he said.

A Congolese Pygmy aid organization is now working in the DRC hoping to help. An international humanitarian emergency organization based in Germany, Diakonie Katastrophenhilfe, has been working with that group, both hoping to erect emergency shelters for the Mbuti refugees.