On Friday the 13th, Botswana’s High Court rejected an attempt by the G/wi and some other San people to regain unrestricted access to their traditional lands in the Kalahari Desert. 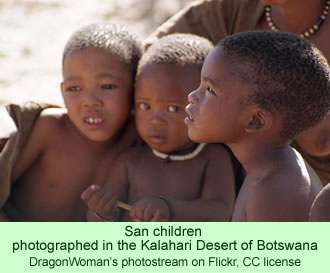 In the 1990s, the government of Botswana started forcibly removing the San from their homes in the Central Kalahari Game Reserve (CKGR) and relocating them to resettlement communities outside it. The G/wi and their allies began a court process to regain their rights. Despite their finally winning a major court decision in 2006 that appeared to allow them to return to their lands, the government of Botswana has since restricted that right to only 189 San adults and their children younger than age 16. All other people at this point who want to enter the CKGR must be related to those 189 permitted adults. Even if they are, they are only granted one month permits to enter the reserve.

The San believe that the government’s policies are designed to slowly reduce the number of people living on their traditional lands. They all live in constant fear of overstaying their permits, and of repression by police and wildlife agents.

The government claims that its policies are only designed for the benefit of the San people themselves, though the former president of Botswana openly admitted that the primary concern of his government was for unrestricted access to wealth from diamond mining in the CKGR. The San people won their rights to return to their lands in 2006 with the critical support from British attorney Gordon Bennett.

The government did not give up. It sought to restrict the G/wi from having access to water. Another court decision in 2011, again with Mr. Bennett as lead counsel, gave them the right to drill new bore holes for water. Then the San—also called Bushmen or Basarwa—decided to try and regain what they felt they had already achieved with the November 2006 decision: unfettered access to their homeland.

As the San appeal to overturn the government’s restrictive policies was nearing a hearing this year, the government used a different strategy. At the end of July, it prevented Mr. Bennett from entering the country. Without having the benefit of his counsel, the San lost their appeal in the High Court on the 13th, mostly on the basis of technicalities raised by the government.

Jumanda Gakelebone, a prominent San activist, commented that “the high court ruling does not look at how much the Bushmen love their land. It gives a clear picture of the Botswana government and how it uses oppression. But it’s no surprise to us and it’s not the first time. We will fight for our rights until we get what we are looking for.”

Survival International, the London-based NGO that champions the rights of persecuted indigenous minority peoples, has condemned the decision of the High Court. The director of the organization, Stephen Corry, said, “The High Court has dealt a cruel blow to the Bushmen, but the battle for their land won’t stop here. Survival will not rest until the tribe’s rights are restored—the wheels are in motion for a full-blown international campaign once again.”

For their part, the San are not about to give up either. Sara Quilter, an attorney at the Botswana firm of Duma Boko and Company, indicated on Monday last week that they expect to present papers in court by the end of this month which will initiate litigation to secure the rights of the San to their lands, without restrictions by the government.

Ms. Quilter described some of the technicalities raised by the government that caused the court to reject the suit on Friday the 13th. They included such issues as the fact that some of the San did not properly sign affidavits—because they are illiterate, it turns out.