Malaysia’s Orang Asli believe that life must be based on nature in order to properly satisfy human needs, according to Anthony Williams-Hunt, a Semai lawyer. An article last week argued that, for the Orang Asli, the forest is their workplace, their shopping mall, their cultural provider, their playground, the source of their utilities, and the center of their religious observances. 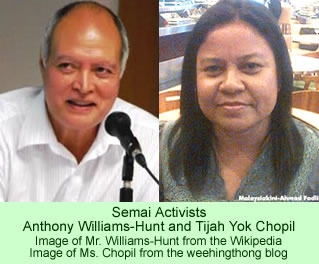 Many Orang Asli—the term means “Aboriginal People” and includes the Semai— would prefer to leave modernity and live in or next to a forested environment if they possibly could. Even those raised most of their lives in a modern, Malaysian, urban setting feel that way. The problem is that many have signed away their rights to their ancestral lands and have accepted modern homes provided by the government. They don’t have forest lands of their own to return to.

Orang Asli families are often uprooted with cash settlements handled by the Rubber Smallholders Development Authority and the Federal Land Consolidation and Rehabilitation Authority, agencies that give the people nice homes in exchange for their lands. The lands are then converted into plantations. The families may live on the plantations, perhaps near their former forests, but they no longer have free access to them.

Williams-Hunt, who is a scholar as well as a prominent attorney based in the city of Ipoh, says that the Semai and the other Orang Asli societies stand to lose even more land. The government wants to amend a 1954 Orang Asli Act and hand out two to six acres of land per Orang Asli family. He fears that the proposed change would convert even more forests to plantation settlements. “We could lose hundreds of thousands of acres of our ancestral lands,” he says.

Aboriginal activists have been protesting the proposed government move. They have been using modern tools such as GPS systems and topographical maps, as well as traditional sources of information such as histories and documents in their homelands to bolster their cases.

The blog of a man named Simon Thong Wee Hing, called “weehingthong,” provides further information about this proposal. The blog quotes part of last week’s news story, and it provides more detailed information in earlier posts from July this year. Evidently, a couple of Orang Asli groups claim that the proposed Malaysian law, Act 134, which would amend the 1954 act, represents an attempt to steal 60 percent of their ancestral lands.

The essence of the act would be to allow the government to assign Orang Asli land titles to individuals, which would have the effect of breaking up the communal lands that those groups have cherished for millennia. One Orang Asli individual, Shafie Dris, told reporters in Kuala Lumpur, “these are the lands where our ancestors are buried and the fruits from which have been jointly shared and used to sustain our way of life.”

Tijah Yok Chopil, a prominent Semai activist and coordinator of the Peninsular Malaysia Orang Asli Villages Coalition, added her voice to the protests. She claimed that the government had not contacted the Human Rights Commission or the Bar Council about the proposed amendment. She pointed out, during a July 12 press conference, that the government had not as yet even provided a text of the proposed amendment.

She urged the Rural and Regional Development Minister, Shafie Apdal, to meet with all the stakeholders and discuss the implications of the proposed act before trying to implement it. Only a few selected individuals had been invited to a meeting to review the matter. “How about the rest of us as well as the Bar Council and [the] Centre for Orang Asli concerns that have not been invited,” she complained.

“The government must hand over a copy of the amendment now, otherwise when they bring it to Parliament we wouldn’t even know its contents,” she argued. For his part, Shafie Apdal has defended the proposed act. It would supposedly improve protection for the Orang Asli. The commissioner for the Human Rights Commission said that the proposal had not yet been reviewed with his agency.

“We are now in the midst of planning a signature campaign to oppose the amendments,” Ms. Chopil said. And if the amendment is presented to parliament, she and the other activists plan to go there and beg for their rights.