Last week the Washington Post carried an Associated Press story about how wireless communications are developing in an isolated mountain Zapotec village in Mexico. 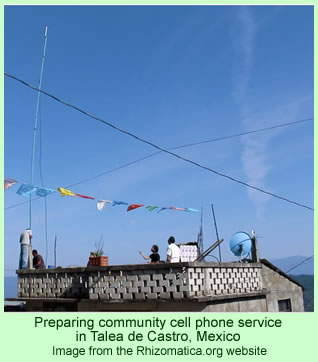 Until this year, placing a phone call in the village of Talea de Castro, in Oaxaca state, has meant walking to a central community telephone booth and paying a lot of money for a few minutes of landline connection with the outside world. The caller had no privacy, and international calls would cost more than US$1.00 per minute. An incoming call would require someone to try and find the person being called.

But the initiative of the residents and their community government, plus available Internet technology, has changed all of that. Using inexpensive, easily available technologies—radio receivers and a laptop—the community has established a mini-telecom company. It can handle 11 calls simultaneously, for a fraction of what the people used to pay.

Keyla Ramirez Cruz, a resident of Talea who coordinates the new telephone system, told the AP reporter, “This has been a project that has really worked in keeping people in touch. Before, people couldn’t talk much because it cost so much.” Local calls placed with off-the-shelf cell phones on the new system are free if the subscriber has signed up for a monthly plan, and calls to relatives in southern California cost about 20 centavos (US$0.015) per minute. The monthly plan cost 15 pesos (US$1.12) per month, a cheaper rate than telephone subscribers pay in Mexico City.

An antenna (see photo above) captures calls onto a base radio that is controlled by software, and the system links with Skype and the rest of the world through the Internet. Free, open-source software receives, routes, and bills the calls.

The residents of the village of about 2,500 people had lobbied unsuccessfully for years for Mexican telecom companies to install telephone service in their homes. Israel Hernandez, a local resident, said that the telecoms required communities to have at least 5,000 people before they would respond. “But in the mountains of Oaxaca, there aren’t many communities of over 5,000,” he said.

The Zapotec people in Talea were disgusted and held a traditional assembly meeting in March 2013 in the town square. Residents voted to invest 400,000 pesos (US$30,000) of community funds to cover the costs of the base radio, antenna, and development of the system.

A member of the town council, Alejandro Lopez Canseco, commented that “it’s very convenient. The calls are good quality.” In fact, according to the AP story, the system has had some problems. Some outlying homes have had poor reception, and there have been momentary interruptions to the Internet service.

But the new system, which now, six months after it started, has 720 subscribers, has been very popular. So popular that the town council voted to restrict calls automatically to five minute durations to preserve access for everyone.

Some observers think the Zapotec community could serve as a model for small, isolated indigenous communities around the world. David Burgess, CEO of Range Networks, a California company that has provided most of the technology to build the Talea network, is enthusiastic. He told the AP that the approach advocated by his company would provide service to small communities, relieve pressure from government agencies on the big telecom companies, and expand the global communications network.

Rhizomatica, a nonprofit that has been facilitating the effort in Talea, is pleased with what they have helped achieve. The mission of the group, according to its website, “is to increase access to mobile telecommunications to the over 2 billion people without affordable coverage and the 700 million with none at all.”

According to Peter Bloom, a leader of Rhizomatica who was quoted by another news report about Talea, “there have been a lot of communities that have been declared no-go zones by the companies, mainly because they can’t make any money there. So the question is: How do you get these communities connected?”

According to Ramirez Cruz, the people of Talea “are very happy because they no longer have to wait in line or go out in the rain.”