Women are taking the lead in a struggle by the peaceful Indian Birhor people to prevent huge coal mines from devouring more of their villages. They are joined by women from other neighboring tribal groups—specifically the Gond and the Kanwar societies—in Chhattisgarh state in their vocal opposition to the mining. 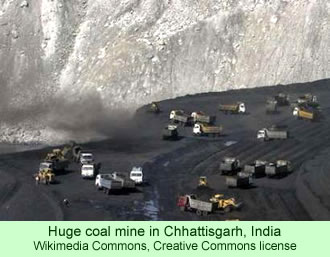 An environmental hearing scheduled for Wednesday last week in the remote village of Tiklirampur, in the Tamnar block of the Raigarh district in the state, was the focus of the protests. An article in The Hindu the day before the hearing indicated that the mines in the district feed the needs of a Jindal Steel and Power, Limited, plant. The Birhor and the other tribal peoples have already lost several villages, so their approach last week was to try and prevent the hearing from even taking place.

The Hindu quoted Kaniram, a 72-year old Birhor man, who pointed out to the reporter where his mud and thatch hut had been, though it was swallowed up some years ago by the gaping gorge of a coal mine. The hearing on the 25th was to consider the application by the company to strip mine another 350 hectares of land. Kaniram said that the Birhor were not aware that there was so much coal under their villages. He added that he “wished there was less coal in the hills.”

He went on to say that when his land was condemned for the earlier mining, he was given about Rs. 1.5 lakh for his 12 acres, or about US$200 per acre. “The money has disappeared and the land price has gone up, coal has killed us,” he said. The father of a family of eight said that their water has turned black, and noise from the blasting in the mines at night has become a nightmare.

The local villagers are protesting to try and save themselves from the same fate. The meeting on Wednesday was organized by the state government, but the national Ministry of Environment and Forests (MoEF) in New Delhi will decide whether more tribal people will lose their homes in the insatiable need for power.

“Our cause is to stop coal mining in Gare 4/6 block, so that at least half a dozen villages of Tamnar can survive,” commented Harihar Patel from Gare, a community threatened by the proposed coal mining. The Birhor, Gond and Kanwar women are holding public protest rallies in the six villages which will be affected by the project.

The mining protests have not always been peaceful. A similar public meeting held in 2008 for a permit in the same block, Gare 4/6, resulted in a considerable amount of violence. According to the newspaper reporter, villagers, including women, were beaten up by the police, and men were arrested, then tortured.

A prominent environmental activist at that violent hearing, Ramesh Agarwal, was shot through the thigh, allegedly by employees of the coal company, but Jindal denies any involvement by its people. As a result, Mr. Agarwal is paralyzed from the waist down, and the alleged attackers are free. He expressed apprehension about the chances of success on Wednesday. “The outcome of the public hearing is not important anymore as the MoEF cannot stop any coal-based project,” he said. The land will be consumed for the coal, “devoured by power companies.” He did not plan on attending the hearing on Wednesday.

Fortunately, The Hindu carried a follow-up news account on Thursday about the hearing the day before. Tiklirampur, the location of the hearing, was overwhelmed on Wednesday by hundreds of SUVs driven by people demanding that Jindal be allowed to carry on with the mining. Some of them admitted to the reporter that they were asked to participate in the meeting. Some appeared to be drunk, and they squabbled with local people who were opposed to the mining.

Subran Sai Rathia, who is from one of the villages that will be affected if the proposal is approved, denied that he had been paid anything for his support for the mining permit. But he did say that he knew of others who had been compensated for their supportive testimonies.

The reporter talked to one group of men who, on condition of anonymity, admitted that they had been paid by a contractor for Jindal to appear at the hearing and testify for the proposal. A farmer named Tushar Patel said that “hundreds of contract workers of Jharkhand and Bihar” had been paid by contractors to speak in favor of the mining. “They were kept close to our village and were assured a job if they support the mining project in public,” Patel said.

However, a representative for Jindal denied those statements. “We have not arranged transport to bring project supporters to the hearing venue, it does not help us,” he said.

The tribal women from 6 different villages made it very clear at the hearing that they were strongly opposed to another coal mine. There are already three open-pit mines in the Tamnar block and, the women said, they would “sacrifice lives to stop mutilation of Gare again.” Shantibai, from Gare, explained their stance: “Our land, our livelihood has been taken away, now you are here to take away lives. Jindal is devouring Raigarh.”

According to the reporter, others complained about the difficulty of getting to the meeting and about technical and legal issues that arguably could invalidate the whole application. On the other hand, senior officials from Jindal described welfare efforts the company has undertaken, though they refused to share their statement with the reporter from The Hindu.