Last Thursday, the Nattilik Heritage Centre in Gjoa Haven officially opened. It displays Inuit items taken by Roald Amundsen during his historic voyage through the Northwest Passage. According to earlier news reports, Amundsen stayed in the small community in Nunavut, named after his ship the Gjoa, for nearly two years, from October 1903 to August 1905. 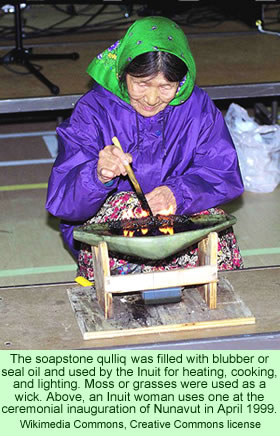 While he tarried in Gjoa Haven, he was particularly fascinated by Inuit material culture. He traded with the local people in order to collect many items which he crammed into his ship. Finally sailing west, he went on to command the first expedition to successfully travel through the Northwest Passage, reaching Nome, Alaska, in 2006. When he returned to Norway, he gave his trove of Inuit items to the Museum of Cultural History at the University of Oslo. He later became the first explorer to reach the South Pole.

Learning of the new museum under construction in Gjoa Haven, officials at the university’s museum decided to donate 15 Inuit items to the new facility, duplicates of pieces in their collections. According to a news report about the opening celebration, the Inuit of Gjoa Haven are quite pleased to see the museum artifacts, which were used in the daily lives of their ancestors.

Items included in the new display include ivory and soapstone carvings, snow knives, traditional oil lamps, and harpoons. The news report about the opening includes an image of a soapstone qulliq, an Inuit oil lamp on display at the museum.

Tommy Tavalok, an elder from the town, reminisced about the way such mundane household items were commonly left at graves. But none remain, even at grave sites. “To be able to see them today gives me a warm feeling,” he said.

In order for the museum in Oslo to agree to return the artifacts to Gjoa Haven, the new facility had to have climate controlled display cases, in order to provide proper protection for the items. Thus, the cases are completely sealed from the outside with a gel included in each case to control relative humidity and keep it stable. This protects the artifacts from drying out.