Last week, a nonviolent rebel group in Tahiti made its latest peaceful attempt to establish an independent nation in the Society Islands, free from French control and influence. The somewhat quixotic group, styling itself as the Republic of Hau Pakumotu, attempted to raise its flag over land it claims, but it was stopped by French Polynesian security forces. 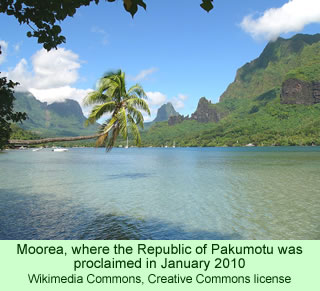 The rebel movement began nearly four years ago on Moorea, one of the Society Islands located just to the northwest of Tahiti itself. An early leader of the movement, Beky Teamo, and about 100 supporters held a public meeting on January 19, 2010, at which they proclaimed the inauguration of their new state.

Observed by police, the Tahitians declared that they were unhappy with the high cost of living and said that they were no longer subject to the laws of French Polynesia. Mr. Teamo announced that they had appointed 12 ministers who would serve 15-year terms, plus three senators and seven representatives.

Teamo’s solution for the unemployment problem on Moorea was to hire 130 firefighters. One of the members of the group told Radio Australia that there were 50,000 supporters of the new nation on the island. However, the census of 2007 showed slightly over 16,000 people living there.

It didn’t take long for the government to react. On January 28, the news reported that the police had seized illegal money and identity cards issued by the self proclaimed new nation. Jose Thorel, a French prosecutor, told one source that the government was focusing on allegations of the false use of titles and swindling.

In early June 2010, Athanase Terii, who seems to be the real leader of the group, used a room in the Assembly of Polynesia to meet with about 80 of his supporters. He appeared wearing a crown and a toga, declared himself King Pakumotu, and said that all of French Polynesia was now under the control of his government. He was personally to be in charge of state imports and exports. Two days afterwards, he was arrested by the police.

Later in the month, free again, he was circulating copies in French, Tahitian, and English of a declaration of his claim for his own ancestral ownership of French Polynesia—its islands, waters, and airspace. He declared that French Polynesia was a mistake, which was now replaced by the Pakumotu Sovereign Republic.

On July 16, 2010, along with a dozen of his supporters, he appeared at the assembly building of French Polynesia so he could hold the initial meeting of his reign. He intended to raise the flag of his new republic, but after a couple hours of demonstrating, the king and his subjects lifted their siege. The building happened to be closed anyway. Three of the royal bodyguards were arrested.

They didn’t go away. Two years later, in July 2012, they were back in the news. The king and about 40 of his subjects occupied an abandoned hospital on Tahiti for several days, claiming to be the rightful owners of the land. About 60 French Polynesian police took control over the situation and ended the occupation.

In April 2013, Terii and 30 followers tried again to take down the territorial flag and raise the Pakumotu banner on the assembly building in Papeete, the capital of the territory.

Last week, the group attempted to occupy land in Outumaoro, an area of northwestern Tahiti that they had evidently been expelled from earlier. Security forces once again foiled their plans.

It is not clear if the declarations that Terii passed out in late June 2010 ever made it onto the Web, and no website for the group has been located. The only official document from the group available in English is a translated proclamation of independence made by Terii in June 2010 and available on YouTube, part one and part two.

In contrast to prominent legislators such as Richard Tuheiava, who use their political positions to champion Tahitian culture, this group appears to thrive on demonstrations and nonviolent protests against French control over the territory. At least their rebellious activities so far have been peaceful and the police responses have been restrained.