“There are no fixed patterns in the Mbuti way of life—whenever the mood takes them, they move deep into the forest and set up a hunting camp.” The narrative that accompanies a marvelous film about the research of famed scientists Terese and John Hart also provides a great deal of information about the Mbuti way of life in the Ituri rainforest of the D.R. Congo. 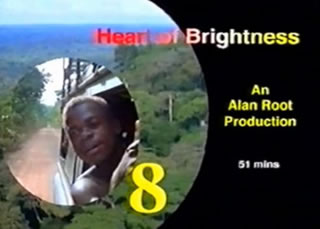 The 51 minute film “Heart of Brightness: John and Terese Hart’s Research on Okapi in the Ituri” was written and produced by Alan Root for Survival Anglia in 1990. It was just uploaded to YouTube on Oct. 23rd by Sarah Hart, the oldest daughter of Terese and John. She was 12 when the movie was made.

The Harts and their three daughters lived in Epulu, the forest settlement made famous decades earlier by Colin Turnbull. That community served as a base of operations for their research on forest animals. Watching this film is almost like seeing a movie based on Turnbull’s classic works The Forest People (1961) and Wayward Servants (1965). The film is a fine complement to those books.

The video opens by telling us that Joseph Conrad’s Heart of Darkness was a place of horrors and hardships. But for Terese and John Hart it became the place where they decided to do their scientific research, raise their family, and interact with the indigenous forest people—the Mbuti. For them, it was the “Heart of Brightness.” The Harts admit that they were only able to advance their work because of the Mbuti.

In the opening section, we see 12 year old Sarah Hart leading the way along a forest trail, “out in front where she can watch the creatures of the forest undisturbed.” She stops to examine something, which turns out to be a goliath beetle, a huge striped insect that she lets walk across her hand. It is as big as her palm. Terese has a baby carrier on her back and her four month old baby girl in it. The eight year old daughter plays at the rear with her young Mbuti friends, acting as if she is scared of the forest spirits.

But the main actors in the first half of the movie are the Mbuti and the duikers, the small forest antelopes that the Harts are studying. The Mbuti “do not just live in this forest, they live with it,” we are told. The forest knowledge and skills of the Mbuti have benefited the Harts’ research. For instance, Terese doubts that a small duiker could eat one of the large fruits, even though the Mbuti assure her that they do. Then, we see one of the little animals chewing on such a fruit and the Harts are convinced. They thus add to their knowledge about the role the antelopes play in dispersing seeds when they defecate in the forest.

The film tells us—and shows us, as a book can’t do—many aspects of Mbuti forest life. We see how they erect the frameworks for their temporary forest huts, cover them with leaves, and move in. We witness them painting their faces, making nets, and using them for hunting antelopes in the forest. One of the most dramatic scenes in the movie occurs when a couple men climb to the top of a giant forest tree to reach into a large hole occupied by a bee colony. They pull out many honey combs and lower them in a basket to the ground, ignoring the scores of stings they get on their bare bodies from the swarming bees. One wonders about the bravery of the Mbuti—and of the filmmaker with his close up video camera.

We are told that the Mbuti do have their times of tensions. A fight breaks out between a man and his wife, and we see them yelling angrily across the camp at each other. But the group clearly disapproves, so while the people do not suppress their emotions, they quickly “get it off their chests with no deferrals and no hard feelings.” They break the tension and go on with camp life.

The second half of the film concentrates on research by the Harts on the okapi, a large forest animal and a relative of the giraffe. The Mbuti continue to play an important role in this segment. When two Mbuti assistants find that one of the traps has caught an okapi, the finders have to race back to camp to alert the Harts. Their small size, the narrator says, is an advantage to them in moving quickly through the forest, where “they can slip through tangled vegetation that would slow a bigger person to a crawl.”

Mr. Root clearly had the instincts of a composer as he developed this production. The work is filled with the human and animal choruses of the woods. The first and second acts open with aerial scenes of the great forest, like overtures out of Wagner. Recurring shots of the Harts’ three beautiful daughters are leitmotifs that punctuate the main libretto, the Mbuti and the wildlife, respectively the friends and research subjects of the scientists.

Mr. Root indicated on his website that the 1990 film “was probably never distributed in the U.S.” Terese Hart also posted a comment about the film on her website: “Some of the singers and some of the dear friends and colleagues of this film are no longer with us, but I think of ‘Hearts [sic] of Brightness’ as a tribute to them all and to the way of life they still maintain.”

Anyone enchanted by the Turnbull books, and by the scrappy peacefulness of the Mbuti, will be charmed by this film and grateful to Sarah Hart for making it available on YouTube. It’s a treasure.