The four peaceful South Indian foraging societies included in this website have similar beliefs that tend to inhibit conflicts, and they have comparable techniques for resolving them when they do occur. Out of the 18 distinct foraging societies in South India, six have been extensively studied by anthropologists, and four—the Malapandaram, Paliyans, Kadar, and Yanadi—are included in this website’s Encyclopedia of Selected Peaceful Societies. 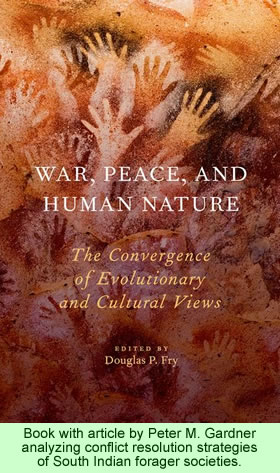 Peter M. Gardner, who has studied the Paliyans for many decades, pulls together an interesting, important analysis of the ways the six groups foster their internal peacefulness. In addition to the four societies already mentioned, Gardner also profiles conflict management approaches among the Chenchu and the Kattunayaka/Jenu Kurumba/Jenu Kuruba (those latter three groups are considered to be the same society by scholars).

Despite the physical distances that separate the six societies, they share many values that assist them in preventing conflict situations from arising. The first is that the people place a premium on autonomous individuals making their own decisions. That belief fosters a sense of mutual respect. Ehrenfels (1952), for instance, argued that the Kadar have a persistent love for individual freedom.

Gardner quotes Morris (1982) on the Malapandaram and Rao (2002) on the Yanadi, both of whom pointed out that the spirit of respecting the decision making of individuals extends even to children. Among the Malapandaram, “children are treated as autonomous individuals and are not taught, or expected to obey their elders” Morris wrote (1982a: 146-147). Similarly, Yanadi children “attend school when they feel like and cannot be coerced by their parents” (Rao 2002: 95).

A second value that helps squelch conflicts is building self-reliance in children. Gardner cites his own study of the Paliyans done in 1966 to point out how kids as young as two are permitted to play with sharp tools such as billhooks without supervision, and how five-year olds are allowed to climb trees or start cooking fires by themselves. In order to foster self-reliance, adults do not provide explicit verbal instructions to their children. The youngsters observe adults and then draw their own inferences.

The third key value is equality, which is either explicitly described, or is at least implied, in the scholarship about all six societies. The Paliyans believe that one must avoid tarakkoravaa, a word which means lowering or diminishing the level of another. This is a way of saying that respect for others is based on equality. The Kadar disapprove of condescending behaviors toward others, and the Malapandaram treat one another as equals from the time they are eight years old.

Gardner summarizes by writing that these values “define in firm and absolute terms” socially acceptable responses to conflicts (p.300). In these six societies, absolute equality, respect, and lack of authority of one person over another foster anarchic situations where people lack leadership structures and abhor conflict.

Of course conflicts arise anyway. Not surprisingly, the people use comparable dispute management techniques to help out. One important technique for resolving conflicts is self-restraint, especially the practices of separation, silence, and tolerance. When people are feeling disrespected by others, individuals in these societies will usually pull back in order to quietly separate from threatening trouble. They will head out into the forest, or the hills, for a short time—or perhaps for several years, as the situation may seem to warrant.

Raghaviah (1962) wrote that “if you are angry with the Yanadi, he simply turns his face away and keeps himself out of your sight for a while until your temper cools down and you yourself invite him for a talk (p.224).” Gardner observes that the Paliyans, and most of the others, separate from people whenever conflicts threaten to escalate.

A second technique for resolving conflicts is silence—people will avoid discussing offensive activities, injuries, or threats. Furthermore, they will refrain from making overt criticisms, offering suggestions, or uttering any form of ridicule, all of which may seem to be domineering behaviors. A Paliyan person who is threatened will respond without making verbal replies or physical gestures. Gardner writes that the sight of a Paliyan simply walking away from a group may be the only signal one gets that the individual is avoiding trouble.

A third technique is for people to simply tolerate irregular behaviors by others. The author describes how an elderly Paliyan man had to cope with his young wife bringing home a still younger lover. Making it clear that the new situation was not his business, and showing an unusual tolerance and forbearance, the man simply said “the gods will get them (p.305).”

These peaceful societies, particularly the Paliyans and the Malapandaram, have conciliators who help resolve conflicts. Informal volunteers, conciliators are people who are skilled in helping others get past difficult situations. They typically lack any authority, though outsiders have often unjustifiably ascribed powers of leadership to them.

Another strategy, one that is rarely used, is to convene community meetings to deal with serious conflicts. Gardner suggests that this approach is new to these peaceful societies. It may be derived from the councils of elders held in many other Indian communities. He watched one in operation seeking to resolve a Paliyan dispute in 2001. The advantage of the public meeting was that the parties to the dispute were able to weigh their options and consider the value of public opinion about the conflict. He decided that, while it is a new technique for the Paliyan, it certainly is in keeping with their more traditional approaches to resolving disputes.

Gardner concludes that the South Indian forager societies have achieved both a remarkable degree of peacefulness within their own groups and have been able to completely avoid warfare with others. His article is included in an outstanding volume containing numerous essays on building peacefulness and avoiding warfare and violence. The article, and the entire volume, are important works that are certainly worth careful study.