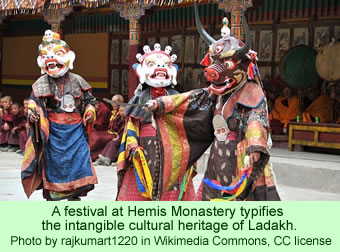 The National Museum Institute (NMI), which has a mission of promoting and preserving India’s arts, music, and culture, hopes the recent initiative in Ladakh will protect the heritage of the region, despite pressures for change brought about by modernization, tourism, and globalization. The focus of the initiative is to develop museums so that they can more effectively preserve the Ladakhi ICH .

The Director General of the National Museum, Dr. Venu Vasudevan, said that the NMI was providing in-service training for personnel from several Ladakhi monasteries. Monasteries preserve much of the Buddhist art, culture and religious heritage of the region. He said that “NMI is helping them adopt new techniques of conservation, display and documentation.”

Cultural preservation, the agency believes, needs to take place on several different levels. At one level, the Buddhist monasteries preserve many artifacts and traditions, and their needs for assistance are clear. NMI has been working for over a year on training and equipping monks and curators in the monasteries to better safeguard, document, and promote their heritage.

But protecting the secular cultural traditions is also important, both in the capital city, Leh, and in rural communities. Prof. Manvi Seth from NMI said that the agency has identified three villages—Gya, Chiktan, and Skurbachan—where it is exploring the possibilities of preserving their heritage by helping develop local institutions.

At Gya, the agency’s project involves documenting, conserving, and providing security for museum objects. “At present, substantial data has been collected from Gya,” Prof. Seth said. The proposed village museums, NMI expects, will be small and will be set up by the villagers, for themselves, though they may also serve to interest tourists in their cultures and their ways of life.

NMI’s intangible cultural heritage project for Ladakh, which began in September 2012, organized a six-day workshop in late October, 2013, to promote community participation in heritage preservation. Participants gave in-depth presentations about documenting the socio-cultural situation in Gya, such as the village stone carvings, the local weaving practices, their Losar celebrations, and the Amchi medicine tradition in the community.

Prof. Seth said that the Ladakhi people strongly desire a museum in Leh which will collect, document, and present their heritage, culture, and lives, both through tangible and through intangible manifestations.

Such a museum, she said, will seek “to become a platform not merely for preserving physical collections but for connecting the younger generation with their own identity, for stimulating dialogue on the present issues concerning culture, and for providing a mechanism for understanding and channelising the future course of cultural change.”