Prince Charles vacationed in India’s Kerala state last week, and on Tuesday he drove into the mountains to visit waterfalls on the Chalakudy River and the nearby Vazhachal Forest. He showed a lot of interest in the research being carried on in that forest, where he met some Kadar employees who help monitor wildlife conditions. 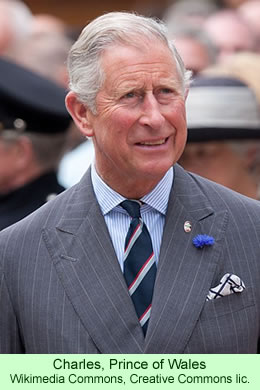 The prince, who serves as the president of the WWF-UK, was hosted by officials of the WWF-India. They explained to their royal visitor the challenges of effectively preserving wildlife in that section of the Western Ghats, an important mountain range of southwestern India.

A major challenge for wildlife managers in the area is to lessen human/elephant conflicts. Elephants that raid crops may be killed by farmers in retaliation. The prince visited the Inspection Bungalow in Vazhachal where he saw a short video showing a local elephant collaring operation and a demonstration of live satellite tracking of the animals.

Dr. Sejal Worah described for Prince Charles the results of tiger monitoring in the forest. She indicated that the area, which had not had a significant tiger population earlier, had recently been declared a tiger reserve, largely as a result of the WWF work. Dr. Worah said that the visit by the Prince of Wales “will be a tremendous boost to the conservation of the ecologically fragile and threatened Western Ghats.”

For his part, Prince Charles expressed strong interest in this sort of research work. He was especially intrigued to learn that tigers could be identified by the patterns of their stripes.

After his visit to the Inspection Bungalow, forest officials took him to visit the elephant corridor, about 5 km further into the Vazhachal Forest. He spent 40 minutes in the area, but he did not get to see any elephants. He had arrived in the midst of a tropical downpour—no thunder or lightening, just monsoon rain. Nonetheless, he was intensely curious about the flora and fauna that he did see.

On the way back, the party stopped again at the Inspection Bungalow, where he met five members of the Kadar community, workers who have been trained for two years as ecological monitors. In 2011, they were already gaining experience in monitoring hornbill species in the same forest, so it is evident from the news stories last week that their experiences as forest monitors and research assistants have been broadening.

The Kadar evidently believe that rain on any auspicious day, such as a wedding or the beginning of a new project, brings good luck. So they decided that the downpour on Tuesday signified that the Prince of Wales will have a long-lasting connection with the wildlife and the forests of Kerala.

Prince Charles asked them about their work, the forest products they collect, and the foods they eat. According to Abdul Nazerkunju, Divisional Forest Officer, he discussed the geographical specialties of the area with the Kadar employees. They showed him some products that they are harvesting sustainably from the forest.

He met more scientists and officials before leaving late in the afternoon, driving once again past the famous waterfalls on the way back down to Kochi, a major city on the coast of Kerala.

On Wednesday, he and his wife Camilla, the Duchess of Cornwall, spent a relaxing day at Kumarakom, a lakeside resort, where, on Thursday morning, he celebrated his 65th birthday. Later in the day, the couple flew to Colombo, Sri Lanka, where the Prince opened the biennial Commonwealth Heads of Government Meeting on Friday. He opened the conference in place of his mother, Queen Elizabeth, who has decided that due to her age she will be curtailing her overseas trips.