Some Zapotec from Coatecas Altas, in Mexico’s Oaxaca state, started an annual festival in Madera, California, in 2009 and it has grown steadily since then. Called La Fiesta del Pueblo, the celebration began as a way for people from the Mexican town to celebrate their community saint, San Juan Evangelista. 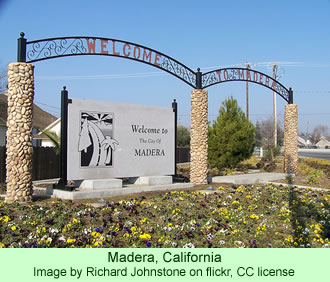 Juan Santiago, a young Zapotec man, spoke to a reporter last week about the celebration this year on December 28th, which was also described in detail by a news story in January 2012. He explained that the reason for the festival in Madera, a small city in the Central Valley, is that many of the local Zapotec are undocumented immigrants who have not been able to visit their home communities in Mexico for 10, 15, or even 20 years. The Zapotec people miss their traditional festivals, he said, so “they ask to reproduce some of the traditions.”

The news story last week focused on the dancing, with the crowds in the ballroom enjoying the loud music. A photo shows a small, costumed bull, a “torito,” dancing in the crowd. The news story two years ago described other activities that were part of the fiesta, such as a basketball game and a 22 mile run.

Mr. Santiago said that most of the Zapotec immigrants in the Central Valley came to the U.S. after first migrating to other Mexican states, arriving north of the border after the immigration reform of 1986—so most of them are undocumented. Other indigenous groups from Oaxaca, such as the Mixtecs, he said, arrived before that reform, so they can legally and easily—and fairly frequently—visit their home villages and families in Mexico.

Santiago explains that his own family typifies the Zapotec experience. His father migrated north first, followed by his brothers then his wife and children. The Zapotec are primarily a farming people, so they settled in rural California, particularly the Madera area of the San Joaquin Valley, to do what they are most comfortable doing: farm work.

The Fiesta del Pueblo “is helping people to get involved in the community,” Santiago explains. “It takes a year to organize it, so the organizing committee has to deal with several people, organization.” He adds, “you feel these activities educate you [and prepare] you to go around better in our community.”

He sees added benefits for the Zapotec in the valley from participating in the festival. Many of the farm workers are single and living alone—men whose families are far away. “So they come to the Fiesta and they enjoy and forget for awhile the nostalgia and the loneliness.”

Although the fiesta started as a celebration of the saint of a particular town in Oaxaca, it is growing as other Mexican indigenous people have begun participating. Other organizations and agencies are helping plan for the festival next year.