Last Thursday, the government of the UK hosted an international conference on the illegal trade of wildlife, but protesters greeted delegates with placards stating “Botswana: Bushmen hunters are not poachers.” In May last year, according to the conference website, His Royal Highness, The Prince of Wales, along with several African leaders developed the idea for the “London Conference on the Illegal Wildlife Trade, 2014” as an approach to eradicating the traffic in animal species that are threatened with extinction. 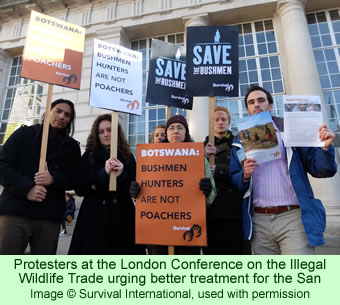 The aim was to seek high-level political commitments that would address three specific issues: strengthening law enforcement, reducing demand for wildlife products, and supporting sustainable livelihoods for communities involved with the illegal animal trade. Conference delegates primarily focused on elephants, rhinos, and tigers, charismatic mega fauna whose body parts are particularly sought after in the black market. The Duke of Cambridge, as well as the Prince of Wales, attended and spoke.

The Ecologist, a British environmental magazine/website, reported that loud protesters chanting slogans and carrying placards greeted the delegation from Botswana, including President Ian Khama. The magazine website reported that the Bushmen, known to scholars as the G/wi and other San societies, have been hassled and persecuted by the Khama government, which claims to be protecting wildlife in the Central Kalahari Game Reserve (CKGR). At the same time, the government is leasing out land in the preserve for fracking, and is preparing to begin diamond mining.

The story reviews a 2006 High Court ruling in Botswana in favor of the G/wi, and the ways the government continues, despite the ruling, to discriminate against their minority indigenous citizens. It requires them to apply for permits to enter their ancestral lands in the CKGR, a policy it refers to as “pass laws,” referring to the recent minority regime in South Africa and its repressive approaches to its majority African citizens.

The boycott on travel to Botswana, launched by Survival International, the UK based international minority rights NGO, is apparently become more successful. Thousands of people have agreed to boycott travel to that country until it ceases its repression of the San people. The boycott has been supported by celebrities such as Gillian Anderson, Quentin Blake, Joanna Lumley, Sophie Okanedo, and Mark Rylance.

The Ecologist quoted Stephen Corry, Director of Survival International, as saying, “President Khama should not hide the persecution of the Bushmen behind the mask of conservation. To ban the Bushmen from hunting while at the same time opening up the reserve to fracking and mining is sheer hypocrisy.”