The government of Sikkim announced last week that out of the 401 school students who had taken exams last December to apply for scholarships, the top three winners were all Lepchas. 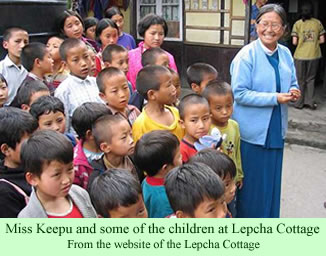 Mongit Lepcha, from the Mangan Senior Secondary School, won the top score in the Chief Minister’s Special Meritorious Scholarship Scheme (CMSMSS). Pema Laden Lepcha from the Gor Secondary School won second place, and Tendong Lepcha from the Navey Primary School, North came in third. Out of the 129 students who qualified for the state scholarships, 103 will continue their studies at public schools in Sikkim, while 26 plan to attend schools outside the state.

Aside from the remarkable fact of Lepcha children gaining all three top scholarship honors—Lepchas number less than 10 percent of the population of Sikkim—the obvious question is why. Why are they doing so well in school? What is the place of education in their society?

From Gorer (1967) we learn that the Lepchas take the education and socialization of their children seriously. He indicates that children are trained to respect the sleeping places of their grandparents, but other than that they learn, by copying the behavior of others, to be highly respectful, particularly of older people.

The Lepchas teach their young people proper behaviors through the examples they set, but they also inflict discipline on children who disobey their rules, punishments which can be severe if they commit serious crimes such as stealing, insulting others, spoiling property that doesn’t belog to them, lying, quarreling, or drawing a knife in anger. Such major infractions of their rules can result in adults thrashing them or meting out other frightening disciplinary actions.

The Lepchas believe that children are either born with a good heart or a bad heart, and those afflicted with the latter must be corrected—the badness eliminated before it is too late. “Unless this badness is eradicated by education, especially from the parents, the child will become a socially undesirable adult,” Gorer writes (p. 305).

Gorer describes the ways the Lepcha instruct their boys and girls to do the work they will take up as they grow older, though that section on Lepcha education may have become somewhat outdated in the decades since the book was written. Their children now go to schools. Enthusiastically.

A magazine feature article published a few months after the September 2011 earthquake, which devastated most of the Lepcha villages in northern Sikkim, focused on the destruction of schools. And more to the point, the article, written by Ratna Bharali Talukdar, emphasized how important schooling is to the Lepcha and the other people living in that area of the state. The government urged that damaged schools should reopen or relocate to other facilities as quickly as possible.

Education officials took the issue of schooling seriously. Some schools quickly added temporary sheds to replace portions of their buildings that had been damaged. For schools that were completely destroyed, the authorities made other arrangements.

For instance, as of December 2011, a private school in Chungthang, a major town in northern Sikkim, was teaching its courses in the camp of the Indo-Tibetan Border Police. A girl said she walked four km. along a rubble-strewn road to attend classes. The author asked her about her long trek to school each day but she expressed happiness just to be there. “Our homes got damaged but, just see, my books and uniform are fine. I love coming to school,” she said.

On November 8, 2011, two months after the quake, a different government secondary school recorded the presence of 18 new pupils, 13 of whom were girls. The headmaster of the school, Sita Ram Singh, told the author, “This provisional arrangement has ensured the prompt restoration of schooling after the tremors, which is very positive. Our secondary school is now running on two shifts to accommodate the new students.”

Lepcha Aachulay magazine, which is known for its effective stories about the Lepcha culture, published an article last October about the history of education among the Lepcha people. The author, Kachyo Lepcha, an Assistant Professor in the Department of Lepcha at the Sikkim Government College, Gyalshing, opens his article by writing, “Education is, perhaps, the only means of preparation for a better life, society or Nation.”

These expressions of enthusiasm suggest why those top three students in the government scholarship competition were young Lepchas.