At the end of last week in Thailand, news reports were cautiously hopeful, since protesters had mostly ended their blockades, expecting the courts to resolve the political crisis. While the impasse continues between the government of prime minister Yingluck Shiniwatra with her mostly rural power base and the urban/elite anti-government faction, at least Bangkok traffic was moving once again. 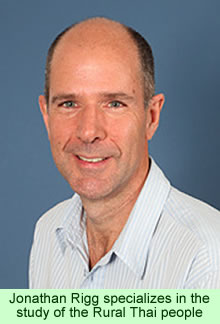 The news has focused a lot in recent weeks on the government’s supposed corruption in administering rice subsidies for the Rural Thai farming people, and the role of rice cultivation in the culture of that nation. A scholar who specializes in Rural Thai studies, Jonathan Rigg, will be presenting a paper on Wednesday next week which may help throw additional light on the culture of that nation.

Rigg, a Professor in the Department of Geography, National University of Singapore, is a prolific author of books, chapters in edited volumes, and journal articles. Prof. Rigg will be speaking on “Personalising the Middle-Income Trap: An Inter-generational Migrant View from Rural Thailand.” His presentation will be delivered in AS3, Level 6, SEAS Seminar Room (06-20) at the university in Singapore, from 4:00 to 5:30 pm on 19 March, according to a press release.

The announcement indicates that Rigg has studied issues related to agrarian change in Rural Thailand, and in Southeast Asia more broadly, for 30 years. He investigates how the Thai people are adapting to the processes of rural transformation, which recent news stories have emphasized. In short, his scholarship should be in hot demand currently, if the politicians and leaders of mass rallies would listen to him and read his works.

The focus of the presentation next Wednesday will be to convey an understanding of why and how migrants who have attained some levels of education and left their rural communities continue to keep their commitments and their roots tied into their native villages. He’ll explain why the rural village remains the centre of the migrants’ feelings of security, belonging, and livelihood. In essence, he argues that the former villagers are caught in a middle-income trap that is structural, institutional, and, for the migrants, personal as well.

One of Rigg’s earlier articles analyzing the social changes occurring in rural Thailand was reviewed in this website in late 2009.