Last month, a government agency in the Philippines invited indigenous people from around the nation to promote peace by fostering the uses of their own languages, as well as the national language, Filipino. 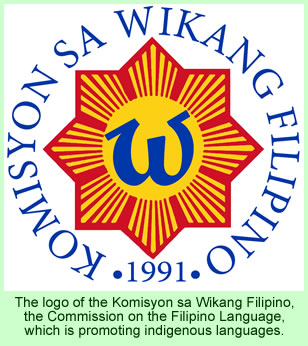 A well written story in the Philippine Daily Inquirer, one of the nation’s leading newspapers last week, reviewed the focus on peace taken by the conference, called the “Wika ng Kapayapaan: Pambansang Summit at Palihan,” which was held in Malaybalay City, Bukidon Province, Mindanao, on February 13 – 15.

The conference was organized by the Komisyon sa Wikang Filipino (KWF—the Commission on the Filipino Language), which is the government agency that regulates the official language of the Philippines, Filipino. It also works to preserve and promote the other indigenous languages of the nation. One of those languages is Buid, spoken by the peaceful Buid people of southern Mindoro island.

A major achievement of the conference was drafting a resolution about building peace through the sensitive use of languages. The resolution, written in Filipino but translated into English, reads: “That peace accords and other laws should be written in Filipino with corresponding versions written in the languages of cultural communities.” The resolution also urged government agencies to consult with the indigenous people prior to embarking on development projects.

Virgilio Almario, the chair of KWF, asked other government agencies to prepare specific programs that would seek to prevent discrimination against the nation’s indigenous peoples. He said that the purpose of the summit meeting was to develop the ideas of the indigenous communities on ways to foster peacefulness in the Philippines, specifically through the uses of their own languages and of Filipino.

“Our long-range goal,” he said, “is to make an encyclopedia-style vocabulary. This will provide meaning for all the words related to peace in different languages that can be explained in terms of traditional thoughts and practices. We [would] also like to elicit ideas on peace and how it is understood in terms of their own languages,” he added.

Roberto Anoñuevo, the director general of KWF, said that the conference was the first major attempt to bring together the indigenous people of the nation to discuss ways that their own languages could strengthen the cause of peace.

Another government agency, the National Commission on Indigenous People (NCIP), agreed with the KWF initiative. Leonor Orlade-Quintayo, chair of the NCIP, said that she supported the campaign of the KWF to promote the use of Filipino, so long as it didn’t compromise the uses of the indigenous languages themselves.

The newspaper story last week quoted the reactions of some of the participants at the conference. Jaime Castillo, from the Ivatan community, located in a group of islands to the north of Luzon, in far northern Philippines, was glad to come, establish links with other indigenous groups in the nation, and focus on peace. He commented, in Filipino, “the summit is a big help to have peace because we could talk with each other in one language.”

Some of the discussions also focused on issues of particular concern to local communities, such as large development projects that had been opposed by the indigenous people. Dindo Dumago, from one of the Mangyan societies on Mindoro—the news report did not indicate which one—complained about a power plant that was being built near some Mangyan villages.

An NCIP representative told him that since the project was already approved, the best they could do was to monitor it to make sure that the memorandum of agreement was followed. Other indigenous people had the chance to discuss similar, local, issues.

An earlier news report on the conference quoted Arnold Reyes, a Buid man whose conclusions about the conference focused on the more general peace theme. His comments, in Filipino, were translated as “the summit was a good opportunity for a peaceful dialogue.”

KWF director general Anoñuevo concluded the conference by saying that “peace issues” were the basic concerns of the Philippine indigenous peoples, and that they should be discussed in Filipino rather than English. He added that the conference highlighted the need for government agencies to interact with the indigenous citizens—“in the language of the people,” he said in Filipino.