The government of India has approved the construction of a huge port facility on the southeast coast of Andhra Pradesh, though the exact location is unclear. Last week the proposal received a scathing review for the harm it would do to the local villagers, to some Yanadi communities in the area, and to a unique bird sanctuary. 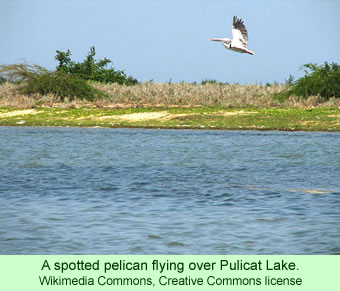 What is clear is that the central government approved the port facility of more than 4,000 acres in Pulicat Lake, north of Chennai on the southeast coast of the Nellore District of Andhra Pradesh state. The government is pushing to develop new ports around India’s coast to handle increasing international trade. The proposed port would be near the village of Dugarajapatnam, to the east of the town of Sullurepeta, which is just inland from the shores of the lake.

A news report in December pointed out that if the port were to be built as proposed, it would harm the habitat of over 30 million migratory water birds such as pelicans and flamingos. It would also have an impact on the lives of more than 40,000 fishermen.

Another news story in January indicated that the buffer zone around the lake, established to protect the fragile wildlife habitat, was 10 km. wide, and it would have to be reduced to 2 km. in order to allow the port development. It was not clear at that point if that hurdle could be overcome. The Pulicat Lake Bird Sanctuary is the second largest brackish wetland in India.

Concern seemed to ease in February when the Times of India, one of the most prestigious newspapers in the nation, reported that a decision had been reached to move the port facility some miles to the north, to get it away from the fragile lake environment—and, incidentally, the tens of thousands of fisher folks who live around it.

Last week, the same newspaper changed its story, reporting that concerns were again focusing on the Pulicat Lake site. And, finally, the report made it clear that numerous Yanadi families would be affected, along with other fishing communities, and millions of migratory waterfowl.

The occasion for the latest news was a report prepared by the Human Rights Forum, 10 members of which visited the site of the proposed port, plus five villages in the Vakadu Mandal, part of Nellore District, which would be directly impacted by the 5,300 acre facility. The Human Right Forum is an NGO that works to overcome structural inequalities in society. It argues on its website that “the essence of human rights is the notion of equality in human value and worth.”

V. S. Krishna, General Secretary of the HRF, told reporters after the group concluded its assessment that a large portion of the land needed for the port was already part of the Eco-Sensitive Zone of the Pulicat Lake Bird Sanctuary. The HRF acknowledged that the livelihoods of thousands of fishing families, including the Yanadis, depend on the natural resources of the huge wetland, and they would be severely impacted if the development were to go ahead.

“This is nothing but environmental vandalism,” Krishna said. He expressed strong opposition to the designs of the government to reduce the Eco-sensitive Zone from 10 km. to 2 km. to accommodate the port project. The sole reason for making such a change was to allow the facility to move forward. He said, instead, that Pulicat Lake should be designated as a Ramsar site, a wetland of worldwide significance, and given complete protection.