The schoolmaster in the Yanadi hamlet of Pamulametta, portrayed in news stories a year ago, continues to lead the community into changing their lives. A news story last week in The Hindu describes the work that Chilukuri Srinivasa Rao has been doing with the children in his school. 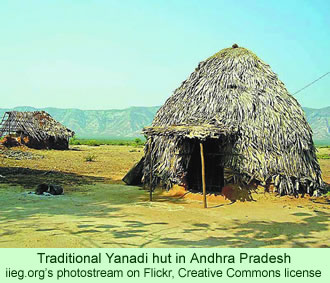 The hamlet, located in the Indian state of Andhra Pradesh, has been undergoing a “major transformation,” according to The Hindu. The changes did not begin when the government opened the school seven years ago, since no teacher could be induced to live in the remote, tribal community. But then Mr. Rao took over, and he was able to instill a sense of belief in the value of education among the Yanadi.

He disagreed with the local tradition of letting hair grow unkempt on the boys, so he got a barber to give them all haircuts. He also arranged for them to have bags, notebooks, and clothing, all provided by donors. He then encouraged the children to draw pictures on the school walls in order to develop in them a sense of accomplishment. He instituted a physical education component in the curriculum. Within a couple years, the school radiated a cleaner and more positive look.

The paintings on the walls conveyed to adults in the community the messages of both the importance of education and the value of abstaining from alcohol. Today, according to the reporter, most of the men shun liquor. Spurred on by these growing, positive attitudes, the Yanadi women are now engaging in self-help and thrift activities.

Roads have recently been built into the colony, provided by the panchayat, the local village governing structure. The local government has also provided water to the Yanadi hamlet. And a Yanadi person, nominated for election to the position of sarpanch in the panchayat last July, was elected in the subsequent polling.

For his leadership role in the hamlet, Mr. Rao was recognized by the former President of India, Dr. A.P.J. Kalam. He also won recognition as an outstanding environmentalist, and he was invited to attend an important international conference on biodiversity held in Hyderabad eighteen months ago.