Officials in eastern India solicited the help of some Birhor youths in an attempt to get rid of some angry bees, which have killed one man and injured others. The Birhor have, so far, been unsuccessful in their attempts to remove the insects, but they plan to try again. 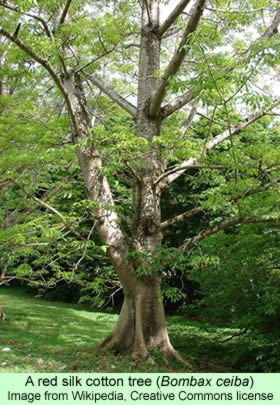 On March 13, the bees attacked two men at the Bokaro & Kargali colliery of Central Coalfields Limited, which is located in the Bermo block, Bokaro district of India’s Jharkhand state. They killed one, Mohammad Israfil Ansari, and injured another. Since then, numerous other people have been stung, six of whom have been seriously injured. The beehives threatened a nearby school and residences as well as the employees of the colliery.

According to a news story in the Telegraph of Calcutta, officials are reluctant to just cut down the tree in which the bees are swarming in order to destroy them, even though local residents are making repeated pleas for help. The problem is that the bees reside in a large, magnificent, red silk cotton (simal) tree.

So officials made the unusual decision to contact local Birhor groups for help, since they are well known for their dedication to gathering honey. In his book, Kumar (2004) confirms that the Birhor gather honey between the months of March and May every year, and again in October and November. The job is usually done by young Birhors, he writes, and he adds that the first person to spot a beehive has the right to the honey. If two see it simultaneously, they will share the harvest.

Evidently, officials in the Bokaro District know this, for they contacted a local Birhor community for help. In asking the Birhor youths to come out at night and destroy the beehives, the officials offered to pay them Rs. 17,000 for the job (U.S. $291).

The Birhor tried to dispose of the bees during the evening of May 14th, the night of a full moon, but they were unsuccessful. They agreed to try again on Wednesday night, May 28, during the new moon. Their elders have said that the new moon would be a more propitious time to do it.

In the meanwhile, local residents have had to keep their windows mostly closed, despite the summer heat, for protection from the bees. Officials urged both children and adults to not throw stones at the dozens of hives in the huge tree, telling them it tends to provoke the insects to attack.

Kamleshwar Singh, the Block Development Officer of Gomia block in Bokaro district, said that attempting to clear out problem bees with the help of the Birhors was a novel approach. He had been asked to contact the group living in the Tulbul area of his block.