A recent journal article reports that, due to sweeping social changes, high school students in Thailand witness nearly as much violence as young people in the United States. The study, by Penchan Sherer and Moshe Sherer, was published in the May 2014 issue of the International Journal of Offender Therapy and Comparative Criminology. 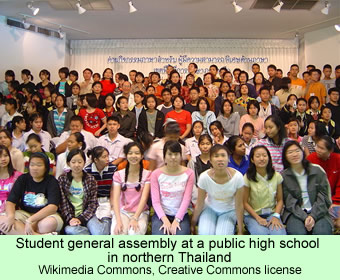 The authors open their piece with a thorough review of the social conditions prevailing in traditional Thailand that fostered peacefulness, especially among the Rural Thai. The Thai people cherished their Buddhist religion and its emphases on compassion, harmony, and caring for others. Teenagers respected their elders as well as their religious beliefs.

But the authors cite numerous scholars who have described the changes that have been sweeping Thai society. The population is aging, the fertility rate is declining, industrialization is increasing, and more and more people are accepting urban values. Young people are attending institutions of higher education, and many are leaving rural areas for jobs in manufacturing industries.

Economic prosperity, which has led to westernization and urbanization, has fostered the erosion of the traditional Thai extended family and the values it represented.  As a result, the authors write, “traditional Thai values are undergoing dramatic changes, and Thai society is becoming more independent, egalitarian, aggressive, confrontational, litigious, and competitive (p.568).” As the traditional order has deteriorated, social norms have become more accepting of aggressiveness.

These changes have prompted Thai young people to become less diffident and less docile than they used to be. With opportunities for work and education, girls have become more independent economically than they were decades ago. But despite their new opportunities, the youth remain somewhat confused because of the conflicts they feel between retaining their traditional behaviors and their desires to emulate what they perceive to be western ways.

Despite the changes in Thai society, many traditional elements still prevail. The family is still the source of behavioral norms and ethical values. Young people still take care of their elders as they age. The youth still respect elderly people, especially in rural Thailand. Core values emphasizing family responsibilities, based on the acceptance of Theravada Buddhism, remain quite strong.

In an effort to explore how these changes have affected the perceptions of violence, as well as its reality, the authors decided to investigate the witnessing of violent incidents by young people in rural and urban Thai high schools. Sherer and Sherer cite studies that report how witnessing violence by teenagers prompts increased levels of their own violence as a result. Studies have shown that boys in particular who have been exposed to aggression and violence then become involved in fights themselves—more so than girls.

The authors write that rural Thai youth have not attained comparable educational or economic levels as their urban counterparts. Thus, since rural Thai communities are more traditional, and their community leaders are still highly respected and influential, the authors expected that school students in those communities would not witness as much violence as their urban peers. They also expected that traditional Thai values would still inhibit acts of violence, especially in the rural high schools.

Their research suggests that their expectations were misplaced.  With the full support of the government, the authors randomly selected rural and urban districts, then schools within those districts, and then 7th through the 11th grade classes in those schools to receive their questionnaires. The students freely participated, or were free to opt out of the study. The researchers sampled the experiences of witnessing violence among 2,897 young people, 38.2 percent of whom were males and 59.4 percent of whom were females.

While these results, according to the authors, are not as high as the reports of violence in schools in Western societies, they are still quite significant. The most frequently reported act of violence, by about 61 percent of the respondents in the Thai schools, turned out to be hitting and punching. One study done in the United States found that the same type of violence had been reported by 80 percent of high school witnesses.

The authors term the rate of violence witnessed by the school students as “alarming”. Perhaps even more alarming, they write that the Thai people now accept violence and the witnessing of violence among their youth as normal. This pattern of acceptance may lead to “less emphasis on measures to tackle this phenomenon,” they write (p.582).

Perhaps most surprising of all, Sherer and Sherer’s results indicate that there was no significant difference between the results from the rural schools and the urban ones. They suggest a couple possible explanations, the most likely of which appears to be that, although rural Thai communities are more traditional in some ways than urban ones, they are becoming more aggressive and confrontational. In essence, they conclude, “differences of violence between rural and inner-city settings are becoming blurred (p.583).”

The reasons for this spread of violence into the rural Thai culture may include the fact that the media in Thailand affect the rural youth as much as they do urban teenagers. The authors suspect that young people in Thailand, like youth everywhere, are highly affected by violence in the media. That influences their behaviors and provokes the acts that the young people witness in their schools, communities, neighborhoods, and homes. One of the additional points Sherer and Sherer make in their conclusion to this fascinating study is that the culture of male supremacy in Thailand, “lends some support to youth violence (p. 585).”