Mary-Ann Kirkby, author of the best-selling I Am Hutterite, has come out with another work on Hutterite culture, particularly their cooking, which she has been promoting during a recent book tour in Alberta. 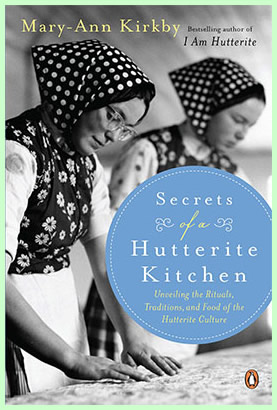 Kirkby spent her early childhood in a Hutterite colony in Manitoba but in 1969, when she was 10, her father had serious conflicts with the head minister. He chose to leave the colony with his wife and their 10 children. The family moved to Saskatchewan, where she felt lonely. “Ignorance of the culture by the outside world was breathtaking,” she said as she discussed her childhood feelings of alienation from the majority culture.

But the news reports about her new book make it clear she has continued over the years to feel close to her Hutterite roots. She still speaks Hutterisch, a dialect of German used in the colonies. While she does not live at a colony, she gets her food staples from one an hour’s drive away from her home in Saskatchewan.

In response to a question by one interviewer, she replied that the thing she misses the most about her roots is the strong sense of community, which she felt keenly when her son was born. She reflected how a new mother in a Hutterite colony is pampered, with food brought to her that includes and emphasizes all her favorites. Someone is assigned to assist the mother and the baby. The new mother doesn’t return to colony work for four months. Kirkby also reminisced fondly about the way the elderly are well cared for in the colonies.

But the articles about her focus, quite naturally, on her new book, Secrets of a Hutterite Kitchen: Unveiling the Rituals, Traditions, and Food of the Hutterite Culture. For food, and the communal feeding of 100 or so people in the colony, is a central element of Hutterite society. The thrust of the book is an exploration of their food culture.

She visited a dozen colonies in the Prairie Provinces of Canada and Montana where, she discovered, “the Hutterite culture is a cooking culture.” They have rituals surrounding foods and eating that are quite important since they reflect the values of the Hutterites.

She points out that the Pleasant Valley Colony, west of Red Deer, Alberta, goes through enormous quantities of food for each meal. Duck, geese, chicken, beef, pork, turkey, sheep, fish, and so on appear on the menu. Many of the foods they consume are the same as the ones their ancestors ate in 16th century Moravia, such as roast fowl, breads and buns. Typical meals, like those from Germany and Russia, are put together with flour, dairy products, eggs, and pork.

They also eat modern foods such as cream cheese and pizzas. They buy ready-made items from grocery stores—cereals, chocolate candy, and other junk foods to feed sweet teeth—but most of what they eat is grown and raised at their own colonies. They eat specific foods on special occasions, such as for weddings or funerals.

When she visited colonies while doing research for the book, she participated in the women’s work, particularly in the colony kitchens. Kirkby joined in with the women, helping them peel perhaps 100 pounds of potatoes for a meal, but in the process, picking up gossip and stories that the others shared with her.

“I wasn’t nearly as quick as they were when it came to plucking ducks or peeling potatoes,” she said, “and I was teased endlessly about my methodical way of doing things, but still I enjoyed it more than I even thought I would.”

In answer to a question about the secret to good Hutterite cooking, she replied that they use primarily organic foods that are straight from their own gardens, cream from their own cows, and meat from their own backyards. “It’s food that doesn’t need a lot of spice but tastes really delicious,” she maintained, even though it does not have a lot of sauces or seasonings.

The journalist asked her how her roots as a Hutterite have affected her own cooking. She replied that the Hutterites eat lots of soups. She extolled the ingredients that go into making exquisite soups at home—bits of chicken, some onions, and salt. She simmers her soups for a long time. She adds some parsley or dill just before serving, and perhaps dumplings.

She tells the journalist that her “comfort soup of choice” is her Nuckela soup, the recipe for which appears in the book and in one of the articles about it.