Last Thursday, Katiushka Borges uploaded to Youtube an effective video she produced about a Piaroa community and their upcoming huarime festival, to which visitors are cordially invited. Ms. Borges gives her email address and welcomes contacts from viewers who are thinking of attending. The video is clearly intended for a widespread audience, for comments made in the Piaroa language are supported with English subtitles, and a narrator provides additional information in English. 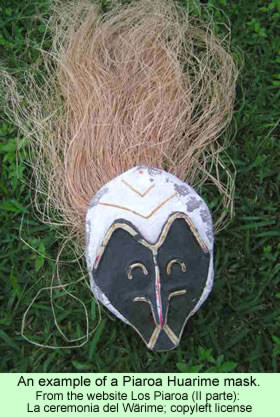 The video opens with an explanation that the Piaroa, a name given to them by missionaries, see themselves as people who are born to live in the forest—and die in the forest. “They are the lords of the jungle,” the narrator says. They live in the community of Alto de Carinagua and are led by an elderly shaman named Bolívar and his wife Elena.

The video shows the old man, Bolívar, now over 100, working at his daily tasks while a pot simmers over a fire and a green parrot calls from a tree overhead. The video makers focus on the shaman as he speaks about their traditions. One tradition has been that elderly leaders, the shamans, must pass along their knowledge to the younger generations at the proper times.

A younger man says that grandfather does not appear to be growing older. We see the old man chopping the end of a pole with his machete. “He is a living example of an integrated vision of life, which translates into tolerance, unity and integrity,” we are told.

Next we are introduced to his son and successor, Rufino Conare, who will be directing the local huarime (also called “warime”) festival this year. He says that the festival is all about sharing. The purpose is to “meet new people, friends, to share, to exchange new necklaces made of beads, to wear ‘guayuco’, [to] dress up in our costumes, and to bring joy and entertainment to the people, to the communities” he tells viewers. The narrator adds that the Huarime festival is an extremely important event for the people, during which they celebrate their harvests through song, dance, and myth.

Another man, identified as Rafael López, continues to discuss the festival along with Mr. Conare. They show a book with illustrations of some masks and point out the significance of each one: a huarime mask, a primitive man mask, and a monkey mask. These masks evidently play important roles during the festival.

The speakers describe in detail the feasting that takes place during huarime of large quantities of meat, fish, and other types of foods. Their drink, called Yarake, is consumed until it is vomited, so the body is thoroughly cleansed. After that, the participants continue eating and drinking. Furthermore, the yucca plant induces visions.

The shaman sings in the evening to prevent the bodies of the participants from being badly affected by the drink. “Because if some of the liquid stays inside the body, people can feel drunk,” López says. He and Conare, who are sitting side by side on a log, both smile. The narrator makes it clear that the festival tests the leadership skills and organizational ability of the shaman as well as his wisdom and spiritual talents.

A woman finally makes an appearance. Ana Cégilla Arana says that visitors “are all welcome to join us, to come here and to share with us.” She quotes her grandmother, who is sitting across the table from her making comments in Piaroa, that it is important to bring food offerings and to make a contribution.