Out of 6,872 children living on the streets of Sumbawanga, well over half, 52.4 percent, are girls, according to a report a week ago from that municipality in southwestern Tanzania. Many of the people in the small city, located in the heart of the historic Ufipa territory, are of Fipa ancestry. The interest in the report is to see if the problem is based on the social structures of traditional Fipa society. 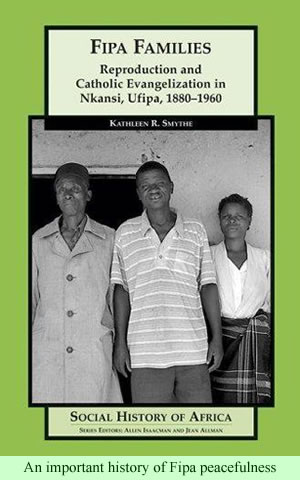 Mr. Biseko noted that the municipal council is planning to pass an ordinance that will penalize parents who can be identified as having abandoned their children. He said that children from the ages of 10 to 15 live on the streets due to the fact that their parents and guardians no longer want to take responsibility for them. The legal action will attempt to cut back on the numbers of street children.

However, Jesse Mkumbo, acting director of Sumbawanga, said the city lacked sufficient local institutions to effectively cope with providing for the welfare of children. Also, it did not have enough funds to handle the situation. He discussed various local institutions, programs and initiatives that are trying to help ameliorate factors that contribute to the tragedy of children living on city streets.

Kathleen Smythe’s book Fipa Families (2006), suggests some possible historical antecedents to the issue of homeless children in the course of an examination of the history of the family in Fipa society. While there are of course many contemporary causes of child abandonment, the historical patterns described by Smythe may give useful clues about the roots of the problem.

Smythe indicates that in the traditional Fipa family, quite young children, ages six to seven or sometimes even younger, would move in with their grandparents. The reason was that the people believed living with grandparents would be an effective way of preventing incest in the home.

Smythe focuses on the role of the Catholic missionaries from Germany, evangelists in that part of Tanzania who were strongly opposed to this practice, which conflicted with their own values favoring the nuclear family as having the primary responsibility for raising children.

When Fipa children reached their teenage years, they normally moved into separate buildings adjoining the family compounds, called intuli. These facilities were designed for sleeping and socializing, but not normally for cooking and eating. The young people could socialize as they wished with their age mates, then pair off when they were old enough until they were ready for marriage.

Needless to say, the Catholic fathers opposed this practice, strongly believing in sexual abstinence until marriage. In contrast, the Fipa viewed socializing in the intuli by boys and girls as an essential aspect of their growth. In order to stamp out those traditional beliefs, the missionaries founded boarding schools and did all they could to keep their resident students from returning to their homes, where they might be tempted to stay, marry, and reject the discipline that the Christians had imposed.

Smythe’s book explores many aspects of Fipa childhood and family relations, but its historical scope covers only up through 1960. It thus does not allow readers to form definitive conclusions about possible connections between traditional Fipa ways of raising children and the contemporary problem of street children in Sumbawanga.

Readers might suspect that the practice of building intuli may have helped produce a climate of opinion where removing children from their homes and abandoning them on the streets is now socially acceptable, but such a conclusion would not be supported by the available evidence. Furthermore, the ways Fipa traditions were subverted by Europeans may or may not be related to today’s social issues. One can only hope that additional field research will help answer these questions relating to Fipa society.