June 28th marked both the 100th anniversary of the assassination of Archduke Franz Ferdinand, an event which triggered World War One, and the 85th birthday of Glenn Paige, who began a movement promoting nonkilling. The media focused a lot of attention on the Great War last Sunday, but more attention needs to be paid to the career of Prof. Paige and the nonkilling concept that he has promoted by founding the Center for Global Nonkilling. 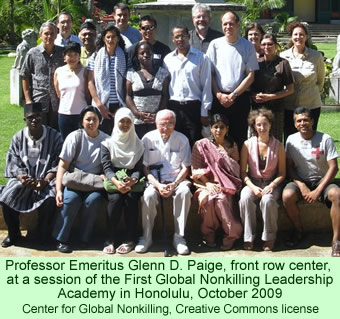 A Wikipedia article on Paige makes it clear that he has produced an important body of political science scholarship over a long, illustrious career, though it does not emphasize enough how profound his writing has often been. For example, at the beginning of his book The Scientific Study of Political Leadership (1977), he asserts that societies create myths about themselves to disguise the nature of their leadership.

But, he continues, those myths have a tendency to distort reality by either exaggerating, or underestimating, the efficacy, potency, and morality of their leaders. The more a society tends to be authoritative and coercive, he believes, the more its myths will exaggerate the effectiveness of its leaders, while the more consensual and representative it is, the more its myths will underestimate the potency of its leaders.

The reasons were predictable. Humanity is basically violent, scarce resources predispose us to competition and aggression, men have a need to protect weaker females, and so on. Prominent political thinkers from Plato until recent times have advanced this view.

Max Weber in the early 20th century summarily dismissed the notion that politics could be peaceful. The musket fire at Lexington set the pattern for the new American republic, Weber argued—violence was the basis for independence, so violence would be the continuing foundation for the development of the nation and its political outlook. Paige suggests in the book that those philosophers were misinformed.

The 2002 book prompted Paige to found a movement, realized a few years later with the creation of the Center for Global Nonkilling. The website for the center, plus their 2013 annual report, provide an excellent overview of the beliefs, commitments, and effective work of the staff and officers of the group. It is a remarkable story which was inspired by the creative scholarship of the founder.

The vision of the center is stated clearly on the website: “that a killing-free world is possible. It is possible for humans to stop killing each other from homicide to genocide, terrorism and mass murder in war.” A few paragraphs later, the website sets out the center’s mission: “to promote change toward the measurable goal of a killing-free world by means open to infinite human creativity.”

The rest of the website, and the 2013 annual report, display the “infinite human creativity” of the staff and officers of the organization in finding practical ways for promoting peacefulness. The range of programs, projects, and activities designed to build a world free of killing is remarkable.

For instance, in 2013, the CGNK published a number of books. The first one listed in the annual report is Global Media, edited by Joám Evans Pim. That work examines the ways the media may be changed to help promote the values of life rather than killing and death. Another book published by the CGNK last year is Nonkilling Security and the State, also edited by Evans Pim. That publication argues that it is imperative for nation states to promote reverence for life as the essence of civilization, rather than promoting the weapons that could annihilate it. The list of publications in the report is lengthy. Many are available on the center’s website.

Just as impressive is the listing of research events and educational programs of the CGNK. Center Director Evans Pim analyzed nonkilling at a variety of conferences and programs around the world during 2013. For instance, he was featured at a course on nonkilling in April that year offered at the Åbo Akademi University in Finland. The course, part of the Master’s Programme in Peace, Mediation and Conflict Research at the university, was to be titled “Introduction to Nonkilling Studies.”

One of the best features of the past year for the CGNK has been the increasing, and well-deserved, recognition it has gained. The Christian Science Monitor provided accolades for the work of Glenn Paige and the center in a feature article on October 11, 2013.

The article, reprinted on the center’s website, describes the spread of Paige’s ideas into numerous academic disciplines, and it provides examples of the growing acceptance of the concept of nonkilling in the everyday lives of ordinary people. The CSM journalist describes the increasing belief in nonkilling as a way of life in Rwanda and the Congo, countries where alternatives to the horrors of warfare and killing are highly desired.

The Glenn Paige Nonkilling School in Kazimia, a village in Congo, has 200 students enrolled in a program where they can study a simplified version of Nonkilling Global Political Science, translated into Swahili. Bishop Mabwe Lucien at the Pentecostal Assemblies of God churches in Congo said that the concept of nonkilling was “new and revolutionary.” Bishop Lucien indicated that, at a training session for 1,100 participants in his country, “the hands of assassins were lifted to renounce killing.”

“The impact of the teachings of Prof. Glenn Paige is enormous. They have transformed the region,” the bishop added. If a straightforward message such as nonkilling can transform Central Africa, can the rest of the world be far behind? Is more evidence needed that June 28th should focus more on Paige’s birthday than on the murder of an archduke 100 years ago? The one event led to a century of violence. If the CGNK has anything to do with it, the other will help lead to a century of nonkilling.