Concern in India for the Birhor jumped dramatically six years ago, though sympathy for this peaceful society has apparently waned as memories of a tragedy in October 2008 grow dim. A news story last week implies that official interest in the Birhor people has nearly evaporated. 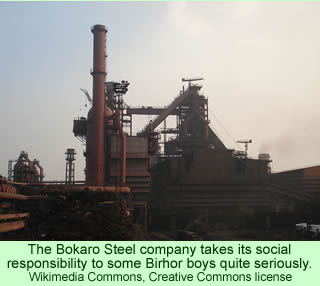 The Birhor experience presents an interesting case study of the rise and fall of popular interest in a so-called “tribal society” in India. This website started covering Indian news stories about the Birhor 10 years ago, and over the next four years only seven reports about them appeared in the Indian media.

Then tragedy struck. In October 2008, India was riveted by a story about the small tribal group in the northeastern part of the country. Eight people had died suddenly of mysterious circumstances in a single Birhor hamlet one evening, and five more had gotten very sick. Malnutrition? Poisoning? No one was sure.

Major Indian media, such as The Telegraph of Calcutta and the Times of India, covered the story, some politicizing their reports and blaming politicians from parties they opposed for inadequately supporting the tribal group. Since the hamlet in question was within an area controlled by the Naxalites, dangerous Maoist guerrillas, the alleged food poisoning was not adequately investigated by competent authorities.

The result of the tragedy was an explosion of interest in the Birhor as a society. The Peaceful Societies website carried four news stories between October and December of 2008 alone, 11 more in 2009, and many others in following months.

But one interesting story, which began well before the 2008 tragedy, was the interest by officials at the huge Bokaro Steel Plant in the Bokaro District of Jharkhand State in trying to educate some Birhor boys. As reported in 2010, the plant had established a special school in 2001 for a select group of Birhor youths so that they could get good educations and then get decent government jobs after they graduated.

News reports over the next several years spoke about the achievements of the Birhor boys in the special Bokaro school and finally, in 2012, their graduation and hopes for employment. Last year, it turned out, officials in the Bokaro District who had promised to hire the young men had deceived them. They were not being hired after all. Some had taken up manual labor—exactly what their ancestors had been doing, in addition to foraging for food and supplies, for many years.

The only thing different about their situation now is that the news media in India continue to have at least some memory of what has been happening to these people. Their continuing saga is newsworthy. The news story last week indicates that the promises they had been given, the encouragements to get their educations, may all turn out to have been phony.

Nine of the young men from the Birhor society who had graduated in 2012 and had been promised government jobs as a result finally learned that it was not true. They had a meeting with Uma Shankar Singh, the Deputy Commissioner of Bokaro district. They reminded him of the district government’s promise of jobs. The official told the young men in response that government guidelines had been “altered,” as The Telegraph put it, and they were no longer eligible for grade IV jobs in the welfare department.

The newspaper explains that state government policies in 2008 had stipulated that Birhor who passed Class VIII as of that date were eligible for government jobs. The policy was changed in 2014 to increase the educational qualifications. As The Telegraph dryly put it, “a Birhor needs to have matriculated by 2008 to be eligible for a job.” Since they graduated in 2012, four years too late, their chances of gaining government positions have been arbitrarily denied to them.

Mr. Singe appeared to be sympathetic—he was just doing his job, he explained. “I myself feel sad for the Birhors. I will write to the state government, explaining the situation, and I hope the guidelines will change. But right now, as a government servant, I am helpless before the law,” he said.

A news story in June last year reported that Bokaro Steel has offered to help by providing the young people with ITI training at the plant itself. That training program was confirmed again last week. It is not clear how many of them will be offered jobs at the plant after they complete the year of training. Some of the youths may petition the government, while others will give up and take menial laboring jobs.

One young man expressed his upset to the press outside the government office. “We were promised jobs and our names were cleared by the welfare department. And now, this amendment. It’s cheating,” he said.

So over a ten year period, the Birhor revolve from being totally ignored, to being intensely scrutinized, to being cheered on, then to once again being cheated and ignored. As the French epigram goes, “plus ça change, plus c’est la même chose” (the more things change, the more they stay the same).