The new Prime Minister of India, Narendra Modi, visited his nation’s space facility in Andhra Pradesh on Monday last week, June 30th, to watch the launch of a rocket that put five satellites into orbit. After the successful launch, the Prime Minister addressed the staff at the Satish Dhawan Space Centre on Sriharikota Island. He suggested that the benefits of India’s space program should be shared with other developing nations, particularly its neighboring countries. 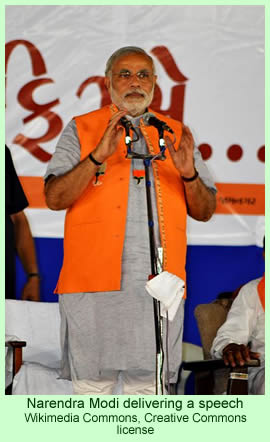 He delivered part of his speech in English, which drew a lot of attention from the Indian media, since he has been noted for promoting the Hindu culture of his nation. News reports speculated that he wanted to appeal to the international, scientific community and to demonstrate that he was fluent in English as well as in the languages of India.

However, he did not display any familiarity with the Yanadi people, who used to live on Sriharikota Island before they were forcibly removed in 1969 to make room for the construction of the space center. Nor did he express concern about the fact that, several days before the official visit, Yanadi villagers living in the general vicinity of the island were rounded up as a protective measure for the dignitaries.

A week before the rocket launch, on Monday June 23, police began what one report referred to as “combing operations” along the 169 km (105 mile) coastline near Sriharikota Island by removing villagers from their communities. Security forces then occupied the villages. The police also began removing Yanadi who live in the forests surrounding the island, taking them to shelters in Sullurpeta, a town about 16 km (10 miles) inland from the spaceport. The news report indicated that they would be allowed to return to their homes the following week, after the Prime Minister had left.

A few days before the police started rounding up the Yanadi, another news story reported that the tribal people did not hesitate to express their grievances about their poverty to visiting politicians in the weeks before the recent national elections. The Yanadi are frustrated that officials do not provide wells with sufficient water so they can irrigate their crops, and they are not shy about asking.

The Yanadi are also complaining about stray animals getting into their crops and are requesting help in fencing their small plots of land. The politicians apparently listened to their complaints, but whether they will do anything is not clear. It also was not clear whether anyone connects the treatment of the Yanadi 45 years ago with the government’s disregard for the sensitivities of local indigenous people in Andhra Pradesh today.