The Lepchas, like most of the peaceful societies, are frequently stressed by changing cultural, social and economic forces, some of which affect their patterns of nonviolence. Anita Sharma published a book last year that seeks to enrich our understanding of, and appreciation for, those changes Lepcha society. A major goal of her work is to update the classic ethnography by Geoffrey Gorer, Himalayan Village, which was based on his three months of field research there in 1937. 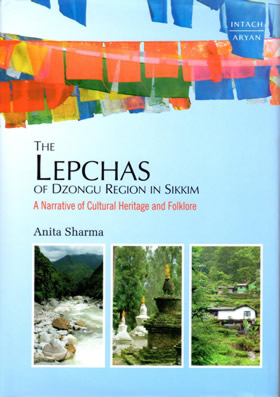 Sharma did her field research in the Dzongu Reserve in northern Sikkim, the heartland of Lepcha country, from September through November 2003. One major topic she reviews is their traditional approaches to resolving conflicts, and the ways they handle disputes today.

Traditionally, quarrels that erupted for no clear reason were considered to be the work of evil spirits. Gorer described how they held elaborate annual rituals in monasteries where they would exorcise those spirits from their communities. The rituals sought to destroy the spirits of enmity of speech, enmity of thought, and enmity of action. However, those rituals are no longer being performed in Dzongu.

In the past, on a practical level, a village official called a Gyapon would use all his wiles to resolve conflicts. If his tact did not work, he might order the parties to a dispute to prepare chi and get ready to spend huge amounts of money. He might threaten to impose large fines on them, naming sums of money far beyond their resources in an attempt to scare them into settling their issues. If the offenders were sufficiently frightened at that prospect, he would soften, settle for smaller amounts, and after they paid those fines, they could all eat and drink together.

Today, however, conflicts that cannot be settled within families or the larger patrilineal groupings are referred to ad hoc groups of village elders who attempt to resolve them. Only rarely is the local conflict resolution so unsuccessful that a dispute has to be referred to the next larger government level, the panchayat.

When a dispute is in fact referred to a panchayat, its members will take it seriously, investigate the intricacies of the issues, and reach solutions. It would be a stain on the community for the problem to have to be referred up to the next higher level of government, the court in Mangan, which is the administrative center of Dzongu.

Theft and crime, Sharma found, are rare in Dzongu, though petty thievery, such as stealing raincoats, umbrellas, and slippers, is increasing. In the remote villages, people rarely lock their doors. Theft remains an alien aspect of life. Lying—perjury—is considered to be a very serious crime, one which casts a permanent stain on a family’s reputation.

Another Lepcha issue that the author reviews carefully is changing gender relationships. Sharma finds that the status of women has declined somewhat since Gorer’s time, most likely due to the influence of Hindu beliefs and practices from the rest of India. But women in Lepcha society still are highly valued. Men and women are paid equally when they work together in communal work parties, though while men are permitted to perform any of the work projects that women do, women will never do the ploughing instead of a man.

While a woman is normally not the head of a family, within the nuclear family, men and women share in making decisions and are considered to be generally equal. Overall, though, women now have subordinate positions in their society compared to men. Nonetheless, the author maintains, women lead a “reasonably democratic existence (p.77)” as they continue to participate in many decisions about economic and social issues in their homes and communities.

Women are religiously prohibited from sacrificing animals, but for Lepchas who still follow the traditional Bon religion, the female Mon (the priestess) has more status and power than the male priest, the Bongthing. Traditionally, the birth of a boy baby prompted the family to sacrifice a pig, goat, or ox, but not the birth of a girl.

In former times, the Lepchas had a casual attitude toward female family members having sex. Presuming an unmarried girl did not get pregnant, the male members of her family didn’t pay much attention to her liaisons—they exhibited little if any jealousy. Things are different today. People are now much more restricted in talking about sex than they once were, and mothers feel a need to control the sexual activities of their daughters. However, Sharma writes, “Lepcha women assert their independence within their domain and do not seem to take kindly to overbearing male dominance (p.80).”

At the present time, people in Dzongu emphasize monogamy more than they used to. Also, marriages of very young girls are much less common now than they were in the past, and instead of the traditional negotiations and arrangements between families, young adults often elope. The economic costs for couples who do elect to have traditional marriages are also now reduced. The popular media prompt many Lepchas to be ashamed of their traditional social conventions.

In sum, Gorer described women as often being more self-assured than men. This status—of comparable worth—has been replaced, at least to some extent, by a Hindu-inspired social order in which men are viewed as having superior power and social standing, Sharma argues.

The Lepchas define themselves not as individuals but as members of a group. They rarely dramatize or show their emotions. They gain approval from their peers through passive behavior rather than self-assertion, which helps dampen manifestations of aggression or competition.

Sharma adds that the Lepchas are well known for their truthfulness and mildness. They are also known for not exhibiting strong emotions. They respect the needs of others for privacy and personal space. They are normally a very patient people—they frequently chastised the author if she seemed to be in too much of a hurry.

She concludes that, despite the changes in Lepcha society, they retain their egalitarian beliefs. She writes that “it would not be out of line to add that their intrinsic principles of simplicity, equality, joy and hospitality have been largely retained (p.76-77).”