The Chewong believe that their forest is composed not only of humans but of a wide range of sentient beings, all of which live by rules that prescribe correct behavior. Their myths, songs, and stories describe their forest world, the ways they understand it, and how those understandings develop the rules that guide the behavior of the “people”—both human and non-human—that live in it. 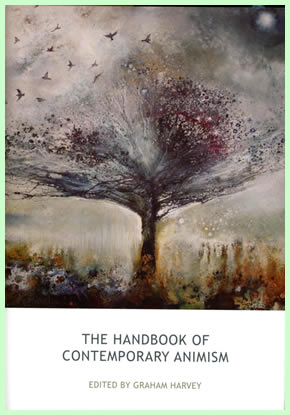 Signe Howell describes the Chewong concepts of reality in the forests of Peninsular Malaysia in an essay she included in the work The Handbook of Contemporary Animism, published last year in the UK. She analyzes the role of animism in their society, which is at the center of their system of beliefs. Her explanation helps clarify why the Chewong are so highly nonviolent.

According to Howell, the animistic beliefs of the Chewong include the conviction that all conscious beings—human and non-human alike—are “people” who have to interrelate in what she calls “a common moral universe (p.106).” This idea requires most living beings, in their scheme of things, to be mutually interdependent.

Howell explains this in more detail. Sentient beings, to the Chewong, not only live in a single moral cosmos, they follow universal principles that mandate proper behaviors in the context of their social order. An effective understanding of the rules of conduct is essential for surviving in the forest world. Humans and the other “people” interact according to social rules based on their correct understanding of the cosmos. Furthermore, the socialization that occurs among humans and the forest beings implies that there are wide-ranging social and moral realities. In essence, the animism of the Chewong suggests that forest beings, which of course include humans, are required to have reciprocal moral relationships.

In addition, since the Chewong and the other forest beings possess consciousness, ruwai, they are not only characterized as persons, they are also all thought to be equal. And this too is important: the Chewong myths, stories and songs about the universe, which describe the behaviors required to get along, must be understood as very real to the Chewong rather than simply as symbolic.

Howell strives to make her explanation clear. The Chewong realize that the common moral universe does not disguise the obvious—that different species of “people”—humans, frogs, whatever— have different characteristics, what the humans think of as their “cloaks.” Those cloaks are special bodies that may be taken off and put on as necessary by shamans. When individuals are cloaked in the person of another species but neglect to behave as their natures indicate they should, metamorphosis occurs.

As Howell describes it, the moral, behavioral rule is what matters to the Chewong. The universality of that value underscores the validity of their belief. Readers of Howell’s essay may find it difficult to understand and interpret the basic value systems of such a different culture as that of the Chewong, but it is worth the effort.

In order to clarify her explanations, the author describes one of the myths of the Chewong. It concerns a young man who went to a river to fetch some water. While filling his container, he accidently caught frog woman. She soon became his wife and they had a couple children.

The man’s parents moved in with their son and his family but in time they had trouble. When the mother-in-law saw the way the children were swimming and frolicking in the water, she became agitated and called them “frog children.” They reported this to their mother, who became angry in turn and took her children with her back to the frog world in the river.

When the young man learned what had happened, he too went to the river and joined his family in the frog house. The grandfather went to the river the next day, but while he could hear his grandchildren calling to him, he couldn’t see them. He did not have the right kind of eyes to perceive the frog-human kids.

Howell explains that the young man, named Bongso, clearly had shamanistic characteristics of his own with his ability to move from a human cloak to that of the frog. But the myth, like so many others told by the Chewong, points out the fact that the divisions between the human world and the non-human are not at all absolute, and the boundaries are not necessarily firm. Those worlds exist in parallel and, at times, one within the other.

The frog woman may have threshed rice for her family, but she did so as a frog might have done, by rubbing the grains against her thighs. The story implies that life in the frog house in the river is carried on more or less as it is in the human house with the parents-in-law. That universality of the basics of living suggests that the moral values supporting all sentient life are very wide reaching indeed.