A book by Anita Sharma published in 2013 described growing gender inequities in Lepcha society, but a current journal article gives an even more negative assessment of the situation. The differing conclusions were based on investigations of very different communities and they were conducted 10 years apart, but their contradictions need to be compared. 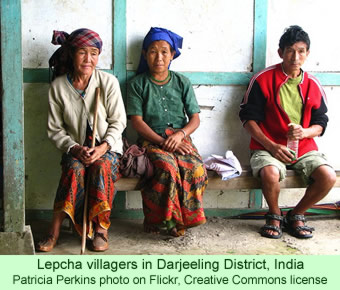 The Sharma book, based on her research done in the Dzongu Reserve of northern Sikkim in 2003, was an overall evaluation of the social situation of the Lepchas, patterned in part on the field research of Geoffrey Gorer (1967) that was conducted in 1937. Sharma found the situation for women overall to be a little worse than in Gorer’s time, but still not too severe.

The authors of a current research article, Ria Roy and Mahua Bardhan, are much more pessimistic about the situation of Lepcha women. They conducted their investigation in an isolated Lepcha community, the Lingsey village, in the Darjeeling district of India’s West Bengal state in 2013.

The two authors clearly appreciate the society they were studying. “A peace loving people, the Lepchas were free and independent aboriginal inhabitants of the Lingsey village. These people used to live an isolated life protected by the forests and the mountains,” they write (p.2). They note that women theoretically have equal rights with men in Lepcha society.

Their investigation consisted of surveying 32 randomly selected households, out of 50, in Lingsey to compare the socio-economic data related to gender issues in the community with the Gender Development Index (GDI) developed by the United Nations Development Programme. The greater the disparities in the social, educational, health, and income rates between men and women in a country or community, the lower the GDI.

One of the stark statistics the authors found was that life expectancy at birth for Lepcha males is about 62 years, while for females, life expectancy is about 50. Disease and a lack of adequate health facilities plague the people of the remote village, but the authors found that females die more frequently from asthma, typhoid fever, liver damage, and strokes than males do. Women also die in the village while giving birth at home.

Educational differences add to the calculation of gender disparity in the village. The authors found that males had a 75 percent literacy rate, while females had a rate of 58 percent. Girls and boys enroll in school in about equal proportions, they found, but girls are not given adequate further encouragement and opportunities to get an education, so they tend to drop out. At the primary level, there are 22 boys and 11 girls attending school.

The authors also looked at the economic situation of women in Lingsey. They found that men and women who are still occupied in traditional agricultural pursuits work on an equal basis. The women take care of poultry, fetch water, do child care, and perform miscellaneous household tasks. Economic disparity shows up more clearly in non-traditional, newer types of employment, which strongly favor men.

Not surprisingly, the GDI calculation for Lingsey is very low: 0.42. The authors summarize the results by writing that Lepcha women, in this village, lag men in income, employment, education, life expectancy, health conditions, and so on. “The low value of GDI clearly indicates that the Lepcha women in Lingsey village are deprived in every respect though [they] apparently enjoy equal rights in society (p.7).”

Roy and Bardhan conclude by providing an overview of the problems that face the Lepchas in Lingsey. The village has no adequate medical facility. The nearest hospitals are in Pedong and Kalimpong, 35 and 50 km away respectively. The village has an inadequate source of water from a spring, which is used for washing, bathing, and drinking. There are no other sources of safe drinking water.

One factor contributing to the low GDI of the village, the authors argue, is the practice of early marriage. This leads to young motherhood, malnutrition, maternal deaths, and too many children, all of which increase the poverty of the women.

On this point, Roy and Bardham differ from Sharma (2013), who described the practice of early marriage as much diminished since Gorer’s time in the 1930s. Sharma (2013, p.15) wrote, “Dr. Gyamtso Bhutia, the only doctor in Dzongu, claims that the incidence of teenage marriage is considerably lower” than it was in Gorer’s time. Gorer had observed only four unmarried girls over the age of 12 in the village he had studied.

Sharma wrote that marriage by elopement was now quite common among the Lepchas. However, it must be remembered that the assessments by Sharma and the two current authors were made in very different villages in completely different states.

Roy and Bardham conclude with a number of recommendations for improving Lingsey’s GDI, such as the establishment of primary schools in the village; the development of a women’s finance group to assist their economic activities; campaigns by agencies to help promote awareness of strategies for improving maternity health; and assistance by government agencies in aiding women to set up small scale handicraft enterprises.