While involvement by the Kadar in wildlife and forest management has been well publicized, a recent journal article gives details about the value of the forest products they gather. The article, published online by Jyotsna Krishnakumar and four of her colleagues, discusses the need for better management of the non-timber forest products (NTFPs) gathered by the indigenous peoples of Kerala state. Their research focuses primarily on a group of Kadar communities. 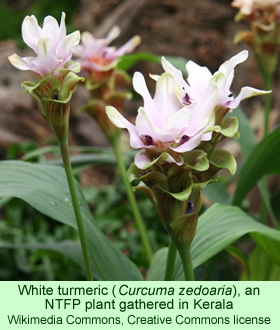 The authors effectively describe the background of the Kadar business of gathering forest products for India’s Ayurvedic industry. Ayurvedics are herbal preparations, the uses of which are founded on Hindu traditional beliefs. They might be compared to patent medicines in other contexts. About 80 percent of the Ayurvedic industry in India is based on products gathered in Kerala, especially by indigenous tribal peoples such as the Kadar.

Examples of NTFPs gathered in that state include zedoary, or white turmeric (Curcuma zedoaria) and green (or true) cardamom (Elettaria cardamomum). In addition to these plants, which have immediate sale value, the Kadar and the other tribal groups gather honey, which is also considered an NTFP. The issue the authors place front and center in their article is that the demand for these products, especially those that support the Ayurvedic industry, is growing rapidly.

The expanding demand has ramifications for the resource base, the Kadar people, and the markets for these forest products. The growing demand is affecting the informal economic sector, where many of the plants are bought and sold. The authors explain the situation as clearly as possible: “With the recent implementation of the Forest Rights Act (FRA) [of] 2006, which ensures clearer property rights and autonomy to tribal communities in terms of access and use of NTFPs, the current market arrangements are expected to be detrimental in terms of both long-term livelihood and conservation outcomes…” In essence, better ways to control the markets need to be found.

The authors explored the issues by surveying, in 2012, 101 Kadar households located in nine different settlements in the Thrissur district of Kerala state. They defined three goals for their research: (1) to analyze the dependence of the selected Kadar households on the gathering of NTFPs; (2) to study the local NTFP markets and their implications for the conservation of the forests; and (3) to assess the economic values of NTFPs to the Kadar under the current methods of marketing, as compared to other possible scenarios such as a certification model. The results of that first research goal are especially useful for understanding the current economy of the Kadar society.

The authors found that 89 percent of the 101 households surveyed are involved in collecting non-timber forest products. Further, they found that 54 percent of all their forest-generated income is derived from the gathering and the sale of NTFPs, and 46 percent from forest management and conservation jobs. The forest and wildlife guards, positions described in news articles as mentioned previously, may be important to the Kadar economy, but the income from those jobs provides less than half of their sustenance, compared to the simple gathering and sale of plant products. In essence, the traditional economy of the Kadar, as gatherers of forest products, is still of fundamental importance to them.

The additional data that Krishnakumar et al. gathered from their survey forms also provide some useful information about the Kadar. The authors found that there is a negative relationship between education and NTFP income: “as education increases, income from NTFP significantly decreases,” they report. In other words, as a few people in the Kadar settlements have reached higher levels of schooling, they have shown less willingness to support themselves by gathering and selling plants and plant parts.

Furthermore, collecting forest products is primarily a male activity. In addition, the authors discovered that Kadar communities situated close to forests tend to be the ones that are more dependent on the NTFPs. Also, somewhat surprisingly, Krishnakumar et al. found that people who placed a greater cultural value on the significance of the forests in their lives tended to be the ones who were less dependent on NTFP income. They defined cultural value as “the use of forest resources for religious activities, traditional health care and social activities.”

The authors provide interesting details about the marketing and the costs of the NTFPs in the different Kadar communities they studied. They calculate that the average annual Kadar household net income in 2012 from NTFPs amounted to Rs. 22, 317 (U.S. $405.77). Of course, the Kadar had costs associated with their enterprises, such as the cost of transportation.

The authors conclude that their study indicates how the Kadar are significantly dependent on the gathering and sale of NTFPs. The rest of their article presents information and an analysis of the ineffective market arrangements currently in place in Kerala for NTFPs, though those issues are not as critical for the purposes of this website.

That said, however, the recommendations by Krishnakumar et al. of better approaches for controlling and developing markets for the Kadar NTFPs appear to an outsider to have considerable merit. This article should be examined by readers who have an interest in so-called “primitive tribal forest societies” or “hunter-gatherer societies” and their ways of supporting themselves economically.