A major demand by Egypt’s Nubian community—to have the option of resettling into their historic homelands along the Nile—moved a step closer to reality last week. The government announced on Wednesday the beginning of a project to form new communities for Nubians around Lake Nasser, the vast impoundment formed in the 1960s by the Aswan High Dam in southern Egypt. 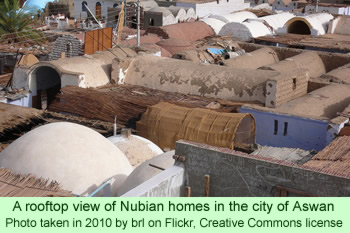 The Minister of Transitional Justice, Ibrahim El-Heneidy, said that he will form a committee, which he will chair, that will be charged with drafting a law to develop Nubian resettlement areas near Aswan city and Lake Nasser. The Nubians, who used to live along the Upper Nile, were removed from their villages 50 years ago when the High Dam was completed and the gates closed.

They were resettled into inadequate homes in the city of Aswan and in other desert areas at some distance from the river, without the ability to continue their farming lifestyle. Their resentments, their demands for compensation for the wrongs they have suffered, their desires for recognition, and their yearning for the right to return to the peaceful riverside conditions of their grandparents have pervaded news stories for many years.

The new committee will include Thomas wa Affia, the head of one of the Nubian clans, plus other public figures and lawyers from the Nubian community. Representatives from the Ministry of Defense, the Governate of Aswan, and human rights groups will also be included on the committee. Input from Nubians in general will be welcomed, Mr. El-Heneidy indicated.

A news report about the announcement in Al-Ahram, a government-controlled Egyptian newspaper, reminded readers that the nation’s new constitution requires the improvement of economic conditions of underprivileged people and those living in border regions. This latest development will attempt to address that goal.