The Ladakhi people of Sumda Chenmo had never enjoyed electricity in their remote village, located in the Ripchar Valley of the Zanskar Range, in southwestern Ladakh. On August 20 in the early evening, a trekking expedition turned on the lights. 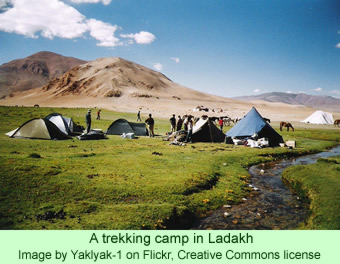 While trekking expeditions frequently go through the valley, this group of people had other goals in mind than simply enjoying the spectacular mountain scenery. The effort was led by an urbanite, Paras Loomba, who had already visited the village, presumably during an earlier trekking adventure. Paras shared his plans with a colleague named Jaideep Bansal plus two other friends, and they organized the expedition committed to setting up an electric system for the people. The group included 20 additional participants.

A news report in the Times of India last week indicated that those 24 people came from India, the US, Sri Lanka, Denmark, Hong Kong, and other places. They had to trek for two days just to reach the village, and then it took them three more to install the solar panels plus the wiring for the 10 houses, which are inhabited by 120 people. The team erected three DC Solar Microgrids to supply power to the village.

When the work was done and the team was finished—at 7:00 pm on August 20, just as the sun was going down—power was supplied for the 121 LED bulbs in the community. The new energy grid also supplies power for a DC LED television that was custom built for this project.

According to expedition leader Paras, the government had never bothered to install electricity for the community. The villagers clearly appreciated the new technology. “I clearly remember that as soon as the grid went live, the villagers spontaneously broke off into singing and dancing traditional Ladakhi songs, and distributing locally brewed barley beer…” he said. He added, “before we knew it, the participants joined the celebrations only to find moist eyes of the smiling villagers, overwhelmed by the simple touch of technology in their lives.”

Jaideep Bansal said that the expedition members, who had never known life without electricity, and the villagers, who had never had it, experienced common ground with the electrification project. One of the key takeaways for the expedition team members, he said, was that they learned from the remote community the ability to “stay happy even without basic amenities.” They also learned “the philosophy of giving and growing with others,” he added.

The expedition was run under the aegis of the Global Himalayan Expedition, a socially-minded trekking organization based in Ladakh that was founded by the well-known English expedition leader Robert Swan. Swan’s major claim to fame is that he is the first person to have walked to both the North and the South Poles. He is an advocate of renewable energy and of preserving the Antarctic environment.

One of the participants in the expedition, Saeed Al Mamari, told the reporter how the expedition had made a big impact on him. “Unique expeditions [such as this one] can actually go a long way in making a difference in the lives of others,” he said. The expedition asked the people of Sumda Chenmo to select one of their villagers to operate the system. They will pay a modest monthly fee of Rs100 (US$1.62) for the maintenance and upkeep of the grid, which will also help give them a sense of ownership of the project.