The Hutterites at the Viking Colony in rural Alberta, 75 miles southeast of Edmonton, constantly look for ways to use their business intuition to develop new enterprises. They are also seeking to preserve their unique values as they adapt to new challenges. 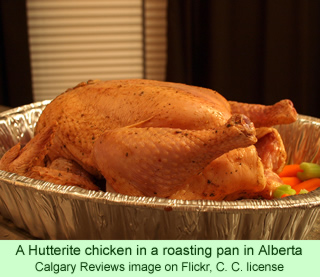 Country Guide, a Canadian farming publication, focused an article last week on Paul Wipf, the farm leader at the colony, and the ways the Hutterites there are trying to innovate. With 110 people, the colony runs a variety of businesses, including raising hogs, producing eggs, selling broiler chickens, plus running a dairy, a grain farm, and a custom feedlot. Looking beyond those businesses, they are open to starting new ventures.

Wipf argues that the reason the 10,000 acre colony diversifies into numerous different farming operations is that he wants to make sure the businesses are sustainable. The colony takes care of all of its members from birth to death—a large financial commitment—so it needs to focus on its long-term economic health. Diversification is a practical approach to managing risk, he reasons.

While the individual families don’t build up private savings, they all live reasonably well. To be sure that the colony can continue to care for its members, it realizes it needs to constantly work to build up its assets. Furthermore, the colony has an obligation to help provide at least short-term support for a daughter colony when it becomes too large and decides to split.

Mr. Wipf compares it to parents providing enough resources to help their own offspring get a start in the world, except that the Hutterite colony sees the prospect on a much larger scale. “The whole plan of a colony is to take care of the next generations,” he says.

One of the interesting aspects of the report is the way the colony fosters innovation. Mr. Wipf believes that the colony has an advantage over the typical family farm in that the Hutterites have a lot of people to contribute ideas to the group for everyone else to review. The colony has a lot of “thinking power,” he argues.

Colony leaders typically have meetings in the morning to discuss important issues such as possible business ventures. If the group decides it likes a proposal, they will research the idea and run it past their accountant. If, after further review, they still like it, they will bring it before the membership for a vote. Sometimes, another member will suggest a different idea, which may be a viable alternative for everyone to review and vote on again.

Similarly, they constantly evaluate their present range of products to see how they can improve them. What factors make the chickens they raise competitive over the chickens raised by other growers? Their edge comes from the fact, Wipf maintains, that their chickens are fresher than other birds in the grocery stores.

He also keeps tabs on trends in the larger society. When he realized that people were doing less cooking at home, the colony moved into producing smoked chickens. Furthermore, he is conscious of the fact that the Hutterites have a recognizable brand. “People seem to trust Hutterites and the way that they do a good job of raising their food,” he says.

The leaders of the Viking Colony consult outside professionals, such as nutritionists and agronomists, for advice on ways to improve their farm products. But he talks to the journalist about more than just ways to improve their farming operations. He expresses concern about the importance of raising young people with the character, faith, and morals that the Hutterites prize.

He looks on his farm management skills as very similar to the abilities that parents have in raising children. He tells the reporter that if people have the ability to be good parents, they can also use those skills as farm managers or enterprise leaders. He is familiar, he says, with raising children and the stresses that teenagers experience.

He welcomes youngsters into the working team, both as a friend and as a person who sets expectations, a mentor who will deal with issues that come up. New workers rotate into different businesses run by the colony so they can get a sense of their strengths and interests. He handles problems directly. He says that when people don’t do their work properly, their colleagues will notice and correct them. He encourages workers to participate in decision-making. He doesn’t micromanage the workers or their operations.

Wipf feels that changes no one can anticipate will happen regularly. New colonies may not continue to go into the same types of farming as the older colonies have done. They will have to think in new ways, outside the box, to develop businesses that will be successful. One possible business he suggests for new colonies might be to provide service for equipment, such as personal vehicles or farm machinery. “Where there’s a will, there’s going to be a way,” a truism that he repeats to the journalist.

He does believe that adapting to the inevitable changes in colony businesses will pose challenges to the culture and faith of the colonies. He concludes that the future of the Hutterites will depend on their ability to adapt and modernize their technologies, and yet to keep them in harmony with their commitments to their beliefs and their faith.