Officials in the Chittoor District of Andhra Pradesh have used the smuggling of red sanders trees as an excuse to prohibit local Yanadi from entering the forests to harvest non-timber resources. Many news sources have described the extensive violence that has been occurring in recent months between the police and large gangs of tree smugglers in southern India. 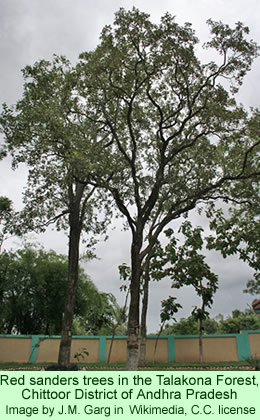 The issue is that the red sanders tree, Pterocarpis santalinus—also known as red sandalwood—is highly valued throughout Asia for its reddish wood. It grows into small trees in the forested hills at the southern end of the Eastern Ghats. According to a Wikipedia article, the wood has been prized for millennia and has been smuggled out of Andhra Pradesh so much that it is listed by the IUCN as an endangered species.

As a result, police in the state have gotten tough on anyone even entering the forests. Hence, the conflict with the Yanadi, who have historically subsisted on non-timber forest resources. The Hindu, a major Indian newspaper, visited a Yanadi community in the Chittoor District last week to investigate the situation.

A lot of the smuggling and violence reported in recent months has occurred in the Seshachalam forest, which stretches for 40 miles to the northwest of the small city of Tirupati, in southern Andhra Pradesh. Ironically, according to the news report, the illegal cutting of wood has increased recently—after the Yanadi were denied entry to the forests.

The reporter, A.D. Rangarajan, describes the effects on the Yanadi. There are 15,000 Yanadi families living in the Chittoor District who subsist on gathering tamarind, gooseberries, wild palm leaves, honey, grasses, and other forest products, much of which they sell in the nearby towns.

The reporter visited Kukkalagunta, a Yanadi village at the edge of the forest in the Yerpedu Mandal of Chittoor District to talk with the people. They expressed their upset that they are now barred from entering the nearby forest. It has always been their home. They have identity cards provided by the Girijan Cooperative Corporation, an NGO that advocates for the rights of tribal peoples in Andhra Pradesh and that sells their forest products. Even with those cards, they are still not permitted to enter the woods. Officials demand that visitors must possess a letter of permission from the Forest Minister—clearly just an excuse to keep people out.

Advocates for the Yanadi protest the fact that the new ban denies tens of thousands of tribal people from pursuing their livelihoods. Mr. Chandamamala Kotaiah, president of the Andhra Pradesh Yanadi Sangham (Society), argues that no Yanadi has ever been accused of stealing a red sanders tree, nor of helping a woodcutter.

The Yanadi in Kukkalagunta tell the reporter stories of their troubles. Nelluru Suraiah describes how he and his wife were beaten by forest officials, and he shows the marks of his injuries on his arms and legs to prove it. The reporter visits other Yanadi colonies where the stories are similar. K. Nagalakshmi, from one community, described how officials used harsh language to frighten Yanadi women away from the forest. Nagalakshmi alleged that officials would torture men who tried to defy the ban.

This news report contrasts with a much more hopeful report just three months ago about some Yandi families in the Chittoor District that are proving successful at managing fruit orchards that they have developed as part of a cooperative project.