The President of Namibia, Hage Geingob, paid a one-day familiarization visit to Tsumkwe on May 22 and the Ju/’hoansi people attending a general public forum complained volubly. 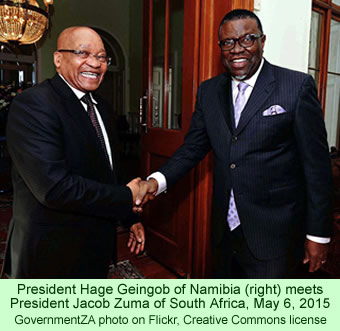 According to a news report last week in the New Era, a prominent Namibian daily newspaper owned by the government, the President listened to 45-year old Ngombe Ngombe complain about the main road into Tsumkwe. Even 25 years after the independence of Namibia, the road is still not paved and many people have been killed due to accidents caused by its condition, he said. Mr. Ngombe also complained about the fact that the Otjiherero Radio Service of the Namibian Broadcasting Corporation does not have a transmitter near the community.

Another local person, Dam Jackson, who is 35, asked the President about the fact that Tsumkwe doesn’t have adequate electricity service. Only a few residents, he said, are connected to a grid supplied by solar panels in the community.

The President and the cabinet ministers who accompanied him evidently grew impatient with the complaining. Mr. Geingob, who has only been president since March 20, responded that his government is working to develop the infrastructure for the entire nation. In the words of the New Era reporter, “he urged the Tsumkwe community to stop complaining all the time and instead to work hard.”

President Geingob added that the residents of Tsumkwe should develop small gardens, projects on which the government could provide some help, and stop badgering him when he visits the community. The news story listed nine government officials at the national and the regional level who attended the public meeting with the President, including Royal /Ui/o/oo, an official who is, himself, from the Ju/’hoansi society.

Another news story in the New Era on Thursday last week further explained the reasons the President spent a day in Tsumkwe. In a post on Facebook, Mr. Geingob evidently wrote that he wanted a comprehensive briefing on the state of things in Tsumkwe, and an understanding of the major concerns that the national government should deal with.

John Steytler, an official in the office of the presidency, explained to the newspaper that addressing poverty in Namibia is a top priority for the President. It is an issue that he personally wants to be closely involved with. It is significant that Geingob chose Tsumkwe as the setting for his declaration for an all-out campaign against poverty in his country. “The President selected Tsumkwe because it is the second most deprived community [in Namibia],” Mr. Steytler said.

The President added, in his Facebook post, “As I have said on numerous occasions, ‘No Namibian must feel left out.’ If that is the case, then ‘marginalized communities’ must come to an end. Marginalization must not be permanent otherwise it becomes a state of mind.”

The New Era reporter does not comment on the fact that complaining has been such a salient feature of traditional Ju/’hoansi society that numerous anthropologists have remarked on it over the years. Several analyzed the function of complaining among them. Lorna Marshall (1976) described the way that vociferous, and sometimes heated, oral communication allowed the Ju/’hoansi to relieve anxieties and tensions, which helped prevent pressures from developing into acts of aggression.

Similarly, Draper (1978) suggested that the Ju/’hoansi constantly bickered at each other as a safety valve for their aggressive feelings. They regularly badgered each other for gifts: the hunter who had to divide up the meat after a successful hunt had to withstand verbal abuse from everyone about the smallness of his or her portion.

Rosenberg (1990) provided perhaps the most detailed analysis of the Ju/’hoansi habit of complaining and why they do it. She explained that foremost among the complainers were the elderly, who were expected to complain—frequently—about the lack of care they felt they were receiving.

Complaining served the function of keeping services and goods circulating, of maintaining the egalitarian nature of Ju/’hoansi society, Rosenberg (1990) argued. Since there was no separation of family versus public interests, complaining allowed domestic issues to be resolved. It also helped to keep the complainer visible.

Furthermore, since there was no way for them to express any different ideology than sharing—they could not describe the concept of personal needs as distinct from group sharing—the complaining helped to reinforce their traditional sharing culture. She added that the only way the Ju/’hoansi competed with one another was in their complaining.

An outsider can only wonder if Royal /Ui/o/oo, the Ju/’hoansi official who is in the office of the President, will get his ear at some point and explain the cultural background to all the complaining he heard in Tsumkwe.