The headline for the news report was arresting: “Rukwa Men Learning to Treat their Partners with Love.” A story from the Tanzania Daily News last week, reprinted by AllAfrica.com, describes the ways men in the Rukwa Region of Tanzania are treating their wives and how some of them are trying to improve. 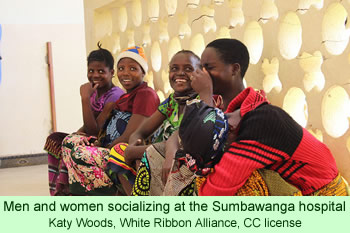 While the news story does not mention the ethnicity of any of the Tanzanian people discussed, the section of the Rukwa Region described in the article is primarily inhabited by Fipa people. The article provides a somewhat more hopeful outlook about the prospects for the treatment of women in that society, and of improving male/female relations in the area around the city of Sumbawanga, than a recent scholarly journal article did. It described and analyzed the depressing frequency of witchcraft murders of women.

The reporter for the current news story, who is not named, describes the harvest season for maize, a major crop in the region, as a mixed blessing and a curse—a blessing for the increased supplies of food, but a curse because it is a time for unsafe sex, sexually transmitted diseases, and unwanted pregnancies. During the plenty of the season, many men spend money on sex and alcohol.

But attitudes and practices seem to be changing. A group called Tanzanian Men as Equal Partners (TMEP) has been instrumental in fostering some changes in male behaviors. The Deputy Project Manager for TMEP, Eugenia Madhidha, said that a major goal of the project is to convince society that men and women are equal.

She indicated that the project teaches people that men should help their partners with cooking and other household chores. Further, they should accompany their spouses to antenatal clinics. Dr. William Msinjili, the Senior Medical Officer at the Kirando Center in the Nkasi District, part of the heartland of the Fipa people, said that there used to be incidents of men beating their pregnant wives during the harvest season.

The staff at that hospital has provided training programs to change the perspectives of the men. “We conduct training at our centre. When couples attend the training we teach them how women and men are expected to relate to each other,” he said.

Imelda Honga, a police officer at the Gender and Children Desk, said that incidents of domestic violence have been decreasing. “The training has helped many people be aware of measures to take once a woman is violated[;] as the days go by the mindset of the community is changing and now communities report these incidents,” she said. Ms. Honga added that sex education and knowledge of the law have helped stem gender violence.

But evidently the changes go deeper than just avoiding direct, physical violence. Dr. Msinjili admitted that in the past he did not help his wife do household chores—at least, not until he took the training program. He did not feel it was his duty to help her with what he viewed as her housework. He says he didn’t beat her, but he also never helped her cook. His observation is worth quoting: “Now that I help her I have realised she now has more time to express her love for me,” he said.

Duncan Mlella, the headmaster at a school in Sumbawanga, similarly said that he has started helping his wife with household chores as a result of training provided by the TMEP program. He tells the reporter that he helps with cooking, laundry, and looking after their baby while his wife is doing other chores around the house. He used to believe that making their bed was woman’s work, but he has changed his attitude on many things such as that.

The TMEP program in the Rukwa Region, sponsored by the Swedish Association for Sexuality Education, was handed over to Tanzanian authorities in July. The district council, the individual communities, and service providers are working to continue it. People are being trained as peer educators to carry on the program.

The literature about traditional Fipa society shows how much their beliefs and habits have been modified over the past century under the influence of changing conditions. Smythe (2006) points out in her book Fipa Families that while boys traditionally handled chores such as farm work, caring for livestock, and collecting wood, while girls did such things as cooking, caring for younger children, and carrying water, the roles were not rigid. Boys would help the girls with the work they normally did if circumstances required, and sometimes the girls would help to take care of the livestock for the boys.

The Catholic missionaries who sought to convert the Fipa to Catholicism beginning over a century ago opposed those practices. They strove to get parents to make sure their children followed the proper separation of gender roles as practiced in Europe at the time. Smythe writes that the Fipa, however, resisted the gender ideas of the missionaries.

Willis (1985) explains those relatively relaxed traditional Fipa gender relationships in terms of their ideology, which fostered a strong sense of gender respect, if not an absolute equality. The basic Fipa ideology, he points out, did not include opposite categories or definite conceptual boundaries; instead, it emphasized unitary processes. For instance, they were quite relaxed about menstruation: they had no prohibitions about it and their word to menstruate simply meant to cleanse oneself.

The major Fipa myth, Willis writes, symbolized and explained their attitudes. It taught that the original king, Ufipa, lost his kingship while out hunting one day when three women—strangers—who represented the Earth came along. The king subsequently reached an agreement with the women that he could retain his office and title, but they would retain rule over most of the territory. This myth, Willis argues, helps clarify the lack of categorical gendered distinctions in their society; it formed one of the building blocks of their peacefulness.