Last month, Paras Loomba led a team of volunteers into Shingo, a remote Ladakhi village, to install a new, solar powered, electrical system for the villagers. The village, located within the well-known Hemis National Park, has never had electricity before. 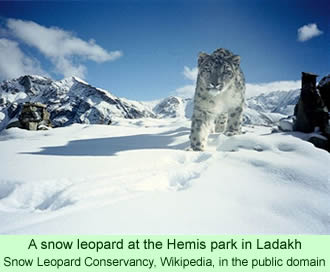 The national park, home to the densest concentration of snow leopards of any protected area in the world, is a frequent destination for trekking expeditions. Providing electricity in the village may help it attract some overnight paying visitors, according to an article last week in the Times of India.

The 20 volunteers arrived by air in Leh on August 9, took three days to trek into Shingo, and worked on the project in the village until they completed it successfully on August 17th. The work included installing electrical outlets in 28 rooms in the village homes plus a 13th century monastery.

They split into teams, each team working on a different building, where they erected solar panels on rooftops, installed LED bulbs, and integrated charge controllers and batteries, giving the residents—and future visitors—electricity for the first time.

The volunteers said that an important objective of the project was to increase home-stays by trekkers headed west into Zanskar or north toward the Markha Valley. Shingo is an important rest stop along those trekking routes. “We are expecting that this step will increase income generation through home-stay[s] of at least Rs 20,000 [U.S. $300] per family per tourist season,” said Jaideep, one of the volunteers.

In August last year, Paras Loomba led a similar team of volunteers into Sumda Chemno, a different remote village in the mountains of Ladakh, to similarly install a solar electric system.