Birhor who violate social rules are sentenced by village elders to pay fines, which consist of bottles of their favorite local beverage, a rice beer called “haria.” 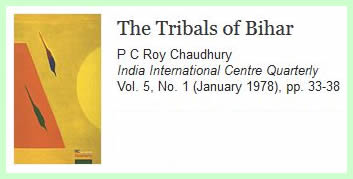 According to a study of haria published in 2014, it is a beverage made from low grade rice that is popular among low income people and tribal groups in eastern India. It has an alcohol content of 2 – 3 percent. Research by Chaudhury (1978) indicated that the Birhor “considered [rice beer] to be a much cherished life giving fluid (p.35-36).” Kumar (2004)says, similarly, that “rice-beer is the favorite drink of the Birhors (p.122.”

A news story last week reported from the village of Chalkari, in the Dhanbad district of India’s Jharkhand state, that an 18-year old named Dalu Birhor was fined two bottles of haria for having a brawl with another person. Another youth, found guilty of theft by the traditional court in the village, received a fine of five bottles of haria and two hens.

The journalist writes that all of the Birhor settlements in the state that do not have any police presence punish people for infractions of their rules by taking away their haria bottles. The headman of the community, Sukar Birhor, told the reporter that his village of 55 families has no need for police anyway. “What is the need of police in our village? In the last 65 years I have not seen police in our village. We are capable of solving our dispute[s] so we do not go to them,” he said.

He added that the beverage bottles collected by the elders will be used during community festivals, or for marriage or death ceremonies. The amount of beverage collected depends on the severity of the offense, he indicated. A social activist named Ghasiram Panda told the newspaper that the punishment was a way of exerting social control by the community.

The officer at a nearby police station said that there have been no instances of complaints by any of the Birhor against their village. The indication in this news report that fighting and theft do occur in the community is interesting, at least when compared to an account from 63 years ago, before the Birhor were forcibly settled into stable communities.

Bhattacharyya (1953) wrote, “The Birhor are peace-loving and honest people. As far as the police report goes they are never involved in any crime. They seldom fight among themselves (p.10).” The author continued that although the Birhor were in the habit of drinking (presumably haria, though Bhattacharyya did not identify the drink), that habit didn’t create any private or public nuisance—or so the anthropologist was told by officials and members of the Birhor community.

Despite the apparent contrasts between conditions in 1953 and 2015, the current news story does make it clear that police are still not needed among the Birhor.