The village of Gharb Sohail, located a few miles south of Aswan, is a good example of a community where the old Nubian culture survives, at least for tourists. A travel article containing several interesting observations about the village and the Nubians appeared last week in an English-language newspaper from the UAE. 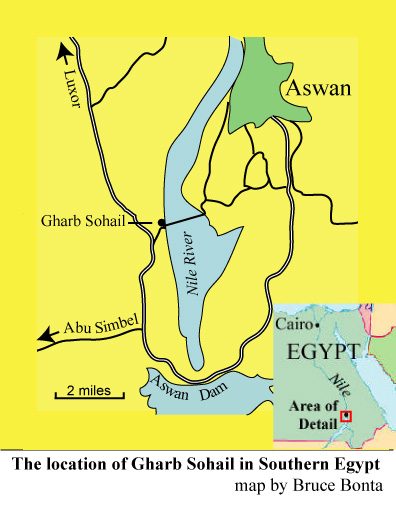 Aya Nader, the writer, observed that while the ancient kingdoms of Old Nubia are long gone, the village of Gharb Sohail retains some of its traditions and has changed into a prominent tourist attraction. Many people in the village have opened their homes as guest houses. Those houses feature such traditional attractions as big halls, benches built into the walls called mastabas, tea areas, and rooms where the women gather after sundown. The walls are typically painted with nature scenes or images of daily life.

Ms. Nader reached the community from Aswan by ferry, which took her across the river and a few miles south toward the Aswan High Dam. She described it as a colorful place with houses that were painted in reds, greens, and blues. An Egyptian woman commented on how much she enjoyed visiting Gharb Sohail because the residents offered tea and henna to their visitors. They also were willing to tell stories to the tourists.

Applying henna to the body is an important decorative art in Old Nubia which has survived in traditional communities such as this one. These temporary tattoos decorate the arms of many tourists who visit the place. Gharb Sohail has a narrow marketplace where spices, perfumes, incense, and baskets can be purchased and weavers make clothing for sale. The village also offers entertaining shows. A visitor from Cairo told the writer, “The people there are very kind and very hospitable.”

Another tourist called the village “a place of inner peace.” She enjoyed experiencing the ancient Nubian traditions, their history and their homes. The floors in the homes, particularly the entry ways, are coated with fine sand, a traditional way of tracking the possible entry of Nile crocodiles and snakes. Today, some houses still have crocodiles—as a lure for tourists. Ms. Nader saw one in a cage in one house.

Since the economy of the area is heavily dependent on tourism, the Nubians have developed a range of promotional approaches to bringing in more visitors. They have created a YouTube channel called “Nuba Tube” to spread the word about their region; they work with the social media in order to market their products, cherish their heritage, and keep their language alive. An Argentine travel blogger named Valentina Primo told Ms. Nader that Gharb Sohail is a special place. It is not only colorful, it has such “a surreal sense of community that you won’t feel [like] a stranger.”