The San living in their traditional settlements in the Kalahari Desert were shaken last week by a diamond mine being closed and, two days later, by an earthquake. A variety of news sources covered both events.

The Botswana Daily News on April 2 reported on a presentation about the mine to the Ghanzi District Council, which includes much of the Central Kalahari Game Reserve (CKGR) and its San residents. At the meeting, Mr. Haile Mphusu, the Managing Director of the Ghaghoo Diamond Mine, owned by Gem Diamonds, announced that effective April 1 mining operations for diamonds had ceased. The mine is located near Gope, one of the traditional villages of the G/wi and the G//ana San people in the CKGR. Employment at the mine was reduced from 183 people to 25 maintenance workers at the beginning of the month.

The company, based in London, had actually announced the closing on February 16, citing as its reason the falling prices for diamonds. Development of the mine, according to the February news stories, had started in 2011. It had not, as yet, reached a level of commercial production, though it was nearly at that point. The mine will be placed on a “care and maintenance” status in case the prices of diamonds go back up and it can resume operations. Even though the mine is near a San settlement, the company did not say how many of the 158 workers sent home on April 1 were in fact San.

A review of the coming of the diamond mine to the CKGR will suggest its close connections with the San people living in the Kalahari. In 2007, De Beers sold its diamond exploration concession in Botswana to Gem Diamonds, which maintained that the gems were potentially worth over U.S. $2.2 billion.

In December 2008, the Botswana government announced that it had approved an environmental impact statement that Gem Diamonds had prepared for the planned opening of its controversial operation in the CKGR. One of the conditions that the government attached to its approval was that the company was not allowed to share any water with the neighboring San communities, even though it would have to sink boreholes and provide water for its own operations.

Government hostility to the G/wi and G//ana people persisted until 2011 when Gem Diamonds was allowed to announce that it would, in fact, help finance the drilling of boreholes for four of the major San settlements in the CKGR. The company finally held its opening ceremony for the Ghaghoo underground diamond mine in September 2014. 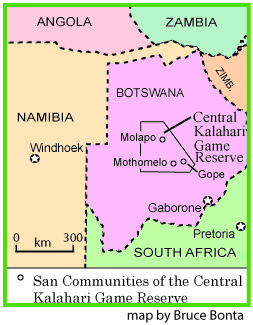 Mr. Mphusu, in announcing the closing of the mine to the Ghanzi District Council last week, said that the company would be suspending most of its corporate social responsibilities for the next two years. The exceptions: it would continue to provide water to the nearby residents of Gope and it would continue to maintain the boreholes it had financed at Mothomelo and Molapo, two of the other San settlements. The company would also continue to provide limited assistance to some schools.

As if to punctuate the dramatic closing of the huge mine, two days later, on April 3, at 7:40 p.m. local time, a large, 6.5 magnitude earthquake struck Botswana. The epicenter of the quake was 142 miles northwest of the national capital, Gaborone, and only 44 km. (27 miles) east of Gope. One news report indicated that it was probably the largest earthquake ever recorded in that country. Another news story announced that injuries were reported from a community 132 km. west of the epicenter—much farther away than Gope—with several people treated in a local hospital. News from the San communities was not immediately available.

Two days after the quake, a major Botswana newspaper reported that officials had inspected the mine and had found no significant damage, other than toppled fixtures in buildings. Mr. Mphusu, the manager, told the press, “We are lucky that we are currently not operating, so we had no workers underground but as of now we have sent a team down to assess if there could have been [any] major damage.” In other words, the workers were lucky they had been dismissed from their jobs.

We don’t know as yet how the San living in Gope and the nearby CKGR settlements have reacted to this unusual chain of events, but Silberbauer (1981) provided clues as to how their traditional beliefs might have been challenged by the earthquake. In an informative section of his book (p. 51-57), he wrote that N!adima, the supreme being, often manipulates natural phenomena. The deity created the basis of the universe and set everything in motion. Sunrises and sunsets over the Kalahari, the courses of the moon, stars, and seasons all result from his activities. He creates the weather patterns and, though Silberbauer doesn’t mention it, he also presumably has a hand in the occasional earthquakes.

More than that, the anthropologist made it clear that N!adima employs natural phenomena to show his displeasure about the courses of human events. Unfortunate occurrences are most likely caused by N!adima. “Singular misfortune … [is] attributed to N!adima having intervened in the operation of natural systems and deflected them to serve his purpose …,” the anthropologist wrote (p.53). Like the G/wi that Silberbauer worked with more than 50 years ago, the people of Gope and the other CKGR settlements today might well wonder at the motives of their supreme being. Silberbauer indicated that the G/wi loved to sit around and discuss the ways of their deity and they are probably still doing that, inspired by the strange circumstances of last week.