The Los Angeles Public Library is celebrating the city’s large number of people from Oaxaca State in southern Mexico, particularly Zapotecs, with a prominent exhibit entitled “Visualizing Language: Oaxaca in L.A.” The exhibit, which has been on display in the central library’s rotunda since September, will remain open until January 31, 2018. It was the subject of a feature last week in Remezcla, a media company that focuses on Latin American culture.

The Library commissioned eight large murals from Dario Canul and Sosijoesa Cerna, both of whom are members of a collective called Tlacolulokos, basically street artists from Oaxaca working in the big city. The artists are aware of the nostalgia that the several hundred thousand Zapotecs living in the L.A. area feel for their native communities and they sought to capture those feelings through their art. Remezcla makes the point that the Zapotec compose the largest Mexican indigenous community in L.A. Next to Oaxaca City, Los Angeles has the largest Zapotec population of any city on the continent.

The murals depict the history of the issues affecting Zapotecs who migrated north. Many crossed the border speaking only Zapotec. They had to learn Spanish in order to understand the other Mexican immigrants in work crews, and of course they needed English as well. They often had to endure jibes by other Hispanics about their indigenous culture. But they have thrived in L.A., in part because of their sense of community, including their gifting tradition called the guelaguetza. 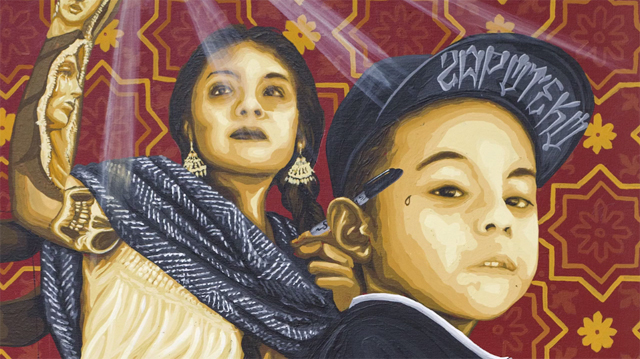 Dr. Xochitl Flores-Marcial, a scholar who studies Zapotec society and culture, explained that their dedication to place and their organizational skills have assisted the immigrants in overcoming the challenges of settling in a new community. “How do you arrive in a city without a dollar in your pocket and are able to survive?” he asks rhetorically. “It’s because someone says, ‘I’ll give you a Guelaguetza, I’ll give you a place to stay.’”

The new murals, however, are careful not to idealize the Zapotec community in either L.A. or Oaxaca. Dario Canul, one of the painters, said at a recent talk in the library that the identity of the Zapotec is constantly changing. He and his colleague tried to depict that flux in their art by incorporating symbols such as the Los Angeles Dodgers, tattoos, 40 oz. beverage bottles, and the like. In essence, they represent the indigenous culture through a mixture of traditional elements and contemporary culture. 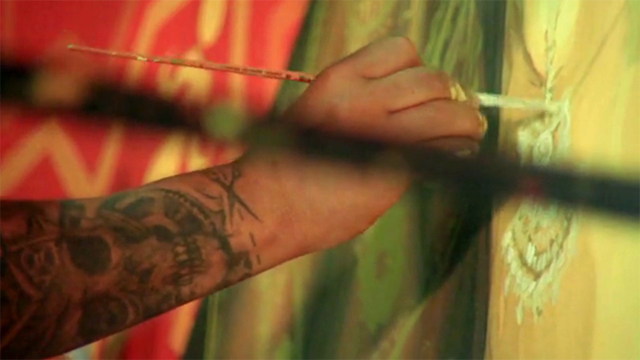 Dr. Flores explained that the murals don’t represent just Oaxacans who are living in Los Angeles. The paintings could also be easily understood by Zapotecs living in Mexico, since when individuals with roots there visit their home communities, they often travel carrying iPhones and wearing L.A. hats, Adidas shoes, and t-shirts with messages. So the artists incorporated those symbols in their murals. Mr. Canul expressed his pleasure at being able to put Tlacolula, a Zapotec valley and city of the same name in Oaxaca, on the map.

Remezcla concluded that the murals depict a conversation between small Zapotec towns in rural southern Mexico and a huge California metropolis. The vitally important dialog will continue, whether or not a border wall is ever built.