Location. Over 300,000 Zapotec people live in the state of Oaxaca, in southern Mexico, and almost 2,000 in the small town of La Paz, the pseudonym for a relatively nonviolent Zapotec community studied by anthropologists Carl O’Nell and Douglas Fry. While the town is certainly not free of conflicts, quarrels, and animosities, few lead to physical violence—cultural mechanisms seem to inhibit it. The nonviolence of this town, and some others in the same area, is interesting because there are other nearby Zapotec communities, such as San Andrés (another pseudonym), that are relatively violent.

Economy. The Zapotec farmers living in these towns raise corn (maize), beans and squashes for food consumption, and they grow various other crops for cash. The people produce a variety of crafts for local markets and are involved in a range of commercial activities. One Zapotec town treasures its communally-owned forests, which prompts the people to use sustainable forestry practices. Others strenuously oppose mining operations that threaten their water supplies, and one town was able to peacefully close down a nearby silver mine.

Beliefs that Foster Peacefulness. In La Paz, the unobtrusive, but deeply felt, beliefs in respect, responsibility, and cooperation foster a non-violent way of life. People believe that even when relationships are not between social equals, respect between individuals is essential. Responsibility is the characteristic of knowing what to do, what is expected, in various social situations. It implies dependence on others. Cooperation is shown by adults who assume responsibilities, accept obligations, and give their time, help, and monetary support for common projects. All three values shade into one another. According to Zapotec beliefs, interpersonal violence is incompatible with these social values.

Avoiding and Resolving Conflict. Three Zapotec illness concepts in La Paz serve as mechanisms for diffusing deeply-felt emotions such as hostility that might lead to violence. Muina is a mild illness or indisposition that people may feel when they are angry toward others; the cure is to get rid of the anger. People rarely make distinctions about whether or not the anger is justifiable. Coraje, courage or passion, is a more advanced stage of illness where the expression of muina has advanced to verbal abuse or even blows. Bilis, bile, is an organic imbalance in the gall bladder brought on by frustration, abuse, or mistreatment by another. This condition is produced by someone’s inability to dissipate anger. People afflicted with these illnesses need sympathy and treatment, not condemnation and punishment.

Gender Relations. Fry (1992b) reported several instances of spouse abuse in San Andrés but none in La Paz . Most women in La Paz are not constrained by a fear of abuse. They contribute economically to their families, they are respected, and they feel free to talk with male visitors in the absence of their husbands. With a few exceptions, most La Paz men are not possessive or jealous of their wives. In contrast, in San Andrés the women do feel constrained against speaking with strange men. The men try to control the San Andrés women, to make sure of their sexual fidelity, through fear and, if necessary, through force. According to an article in 2014, however, the gendered nature of many Zapotec communities is changing as men leave to take jobs in Mexican cities or in the U.S., leaving the women behind to assume ever greater responsibilities. 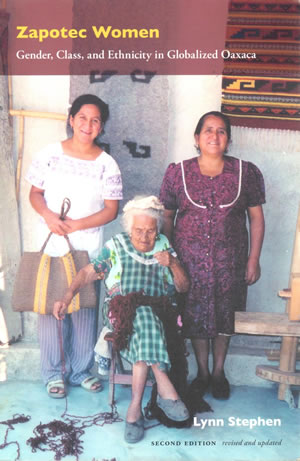 Raising Children.Infants are nursed until the age of three, and are often offered the breast as comfort. During this period the child’s innate needs for dependency are strengthened and reinforced. However, parents abruptly end that dependence and emotional involvement when children are between three and five years of age. The children of La Paz are normally peaceful, well-behaved, and compliant. Their parents discourage play fighting as well as real fighting—they tell their children that it is not good to fight. The La Paz children practice patterns of restraint that reduce physical contact during periods of hostile interactions, and they may become more restrained in their behavior as they grow older.

Sense of Self. People of both La Paz and San Andrés believe in respect, equality, and cooperation, and they generally feel they should avoid stealing, adultery, or physical violence. But while the people of San Andrés have a basic image of themselves as good, they also accept the idea that inevitably some people in their community are violent, lack respect, and are prone to fighting when drunk. They rationalize that sometimes aggression is justified, sometimes vengeance is honorable, sometimes fighting is to be expected when people are drunk. In contrast, the people of La Paz have no such countervailing acceptance of violence. La Paz people strongly internalize their values: they do not speak of disrespectful or violent people in their town. They do not accept violence.

Social Control. The Zapotec of La Paz employ formal social control methods to minimize aggression. A community council, meeting almost daily, provides a forum for the airing of hostilities. It functions to contain conflicts before they can disrupt society, and it allows public sentiment to be expressed. Informal methods of social control are even more important, such as the threat of gossip about people who do not effectively manage hostilities. One important informal method is that people will categorically deny any hostile intent, even in behaviors that vent deep feelings of animosity. Denial reinforces their ideals—that they behave responsibly and cooperatively—and it disrupts the possibility of a chain of aggressive events taking place.

Strategies for Avoiding Warfare and Violence. The Zapotec of La Paz periodically engage in drinking to the point of inebriation, during which they are expected to vent their pent-up anger and hostility. When La Paz people get drunk, however, they still do not have a license to let alcohol be an excuse for unbridled violence. They cannot escape their basic boundaries: that individuals should not exceed the limits of permitted anger, hostility, and modest, occasional physical violence while under the influence.

But How Much Violence Do They Really Experience? While La Paz and San Andrés are similar in many respects, there are some very significant differences. La Paz, historically, has had an annual homicide rate of 3.4 per 100,000 people; San Andrés has 18.1. There have been no murders in La Paz in a very long time, versus persistent homicides in San Andrés. La Paz has few instances of physical violence, especially during drinking events; San Andrés has a lot of physical violence, especially during drinking. Although La Paz does experience conflict, hostilities, and occasional violence, it is significantly less violent than the neighboring community.

November 5, 2015. Hallucinogens for the Zapotec