Nile crocodiles are very large, highly aggressive, African fresh-water predators that are feared throughout much of their range. They consume hundreds of human victims per year. People of course try to avoid them except for the Nubians of Gharb Sohail who love them.

The people in this one village on the Nile just south of Aswan but north of the High Dam have learned how to raise the giant reptiles from hatching, feed them well—but not other humans!—and allow tourists to take selfies with them. A community well known for its tourism has devised a stunning new approach.

An article last Thursday in the newspaper Asharq Al-Awsat provides details about the obsession in Gharb Sohail for its crocs. The article emphasizes that crocodiles mean more to the Nubians than just as a source of tourist dollars. In ancient times, the crocodile-headed god Sobek symbolized the Nile and its importance to humans. The Nubians mount mummified crocodile heads on their doors as totems, seeking blessings for their beliefs.

The stuffed reptiles on house exteriors indicate that the homeowners are raising the huge animals as pets. A Nubian man, Hassan, gently stroked Francesca, his five-foot long, 15-year old pet crocodile on its back. The 45-year-old told the journalist that he has raised her since she was hatched. He feeds his pet with chicken, fish, and other meats.

He said that his father was one of the first people in the village to start raising the crocodiles in their homes as a way of appealing to tourists. Over the past 20 years, Hassan has developed keen instincts about where to look for crocodile eggs and when they will hatch. He has learned where the wild females will lay their eggs along the banks of Lake Nasser, the reservoir formed by the High Dam.

He tries to be at the nest site when the baby crocs hatch so he can quickly take some of the newborn reptiles to his home. “The crocodile’s aggressive nature is tempered by growing up in the home with us and being cared for,” he said. 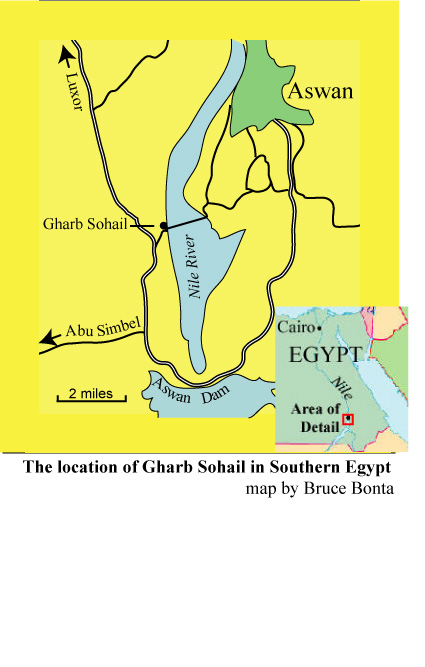 Hassan indicates that a group of visiting Italian tourists were so delighted with the crocodile that they named her Francesca, a name that Hassan likes and has kept for her. She is the star in the show that the people of Gharb Sohail put on for tourists, who love to snap selfies with her. A tourist from Cairo, Hany, visited the village with his children so they could enjoy seeing the crocodiles. He said he especially liked watching Hassan open Francesca’s mouth with his bare hands.

Hassan points to the mummified head of another crocodile in his home and introduces it as the late crocodile Franco, who died just the month before. The owner of a café in the village, Abdel-Hakim Abdou, recommended that a tourist should visit Hassan’s place—a must-see tourist attraction, evidently.

He praised crocodiles as essential to the Nubian culture. “The Nile for the Nubian represents life… everything that roams in it we consider angels,” he said.